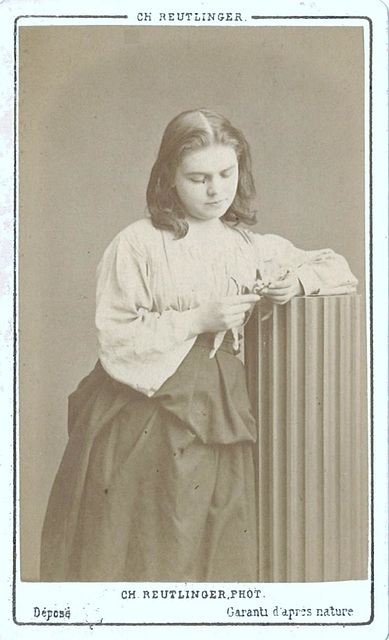 Célestine Galli-Marié, born Célestine Marié de l'Isle (1840-1905); French mezzo-soprano.
She was the daughter of the opera singer Félix Mécène Marié de l'Isle (1811-1882), who taught her singing. In 1859 she made her debut at Strassburg and in 1861 she performed at Lisbon. From 1862 until 1885 she was engaged at the Paris Opéra-Comique. She created various première-roles. The most known are Kaled in Maillart’s “Lara”(1864), Blandine in Gevaert’s “Le capitaine Henriot” (1864), Friday in Offenbach’s “Robinson Crusoé” (1867), Fantasio in Offenbach’s “Fantasio” (1872), Lazarillo in Massenet’s “Don César de Bazan” (1872) and Zanetto in Paladilhe’s “Le passant” (1872). She is however best remembered for creating the title-role in the opera “Mignon” (1866) by Ambroise Thomas (1866) and the title-role in “Carmen” by Georges Bizet (1875). These two roles made her world famous and from 1875 on she made guest appearances all over the world in these two opera’s. In 1885 she appeared in the 100th (gala)performance of Carmen at the Opéra-Comique. Here she ended her career in the same year. In 1890 she returned to the Opéra-Comique to sing in a fundraising performance to erect a monument to the composer Bizet.

The mezzo-soprano Paola Marié (1847-1919) was her younger sister and was also well known for the interpretations of Carmen and Mignon.

On the photo she is seen as Mignon in the eponymous opera by Ambroise Thomas.
Suggested groups:
Comments