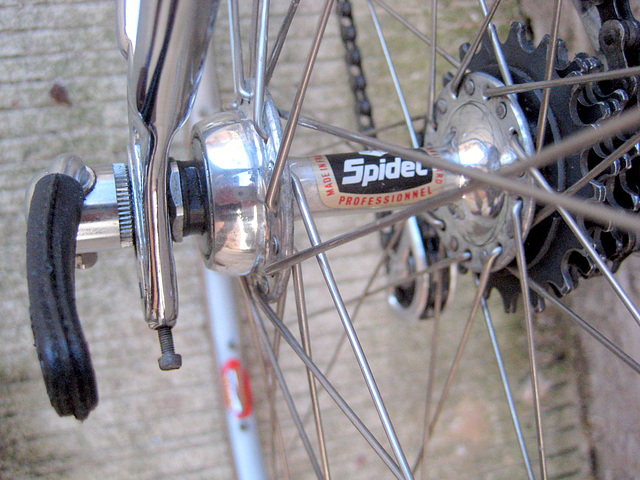 Some history
Peugeot created its own in-house custom racing bike frame building division in 1974, the same year that Raleigh did the same with its SBDU (Specialist Bicycle Development Unit). The model designation PY was adopted for the Prestige Peugeot machines.

In addition to building the Peugeot cycling team's bikes, Prestige Peugeot offered off-the shelf machines, including limited edition replicas of Tour de France champion Bernard Thevenet's PY-10, to the French and European market as well as completely custom made framesets with a wide choice of components featuring the Spidel Group (Simplex, Stronglight, Mafac and Maillard). Framesets were available in 531 Extra Legere (531c), 531 and 753 tubing with choice of geometry and colours.

The PY-10CP (Course Professionelle) was always the top-end model with 531 Extra Legere or 753 tubing (1980 only). This was rebranded in 1982 as the PRO-10 (531 Extra Legere only) which proved to be the last model built by the Prestige Peugeot division. The example offered here is the PRO-10 for the American market which was offered only in the 1982 catalogue and was essentially the same as the 1980-81 PY-10CP except for a braze-on front derailleur and drilled rear drop-outs. Like the PY-10CP, it was available only by custom order with an eight-month wait usually. By this time, component options were limited to hubs, rims, stem/bars, seatposts and saddles.

The Prestige Peugeot custom frame shop was closed c. 1982 and the remaining PY models were factory made complete bikes.

The restoration
Purchased as a complete machine with almost all origial components. Clincher wheelset replaced with a sew-up wheelset with Spidel Professional hubs and Super Champion rims. SR Laprade seatpost replaced with Simplex.