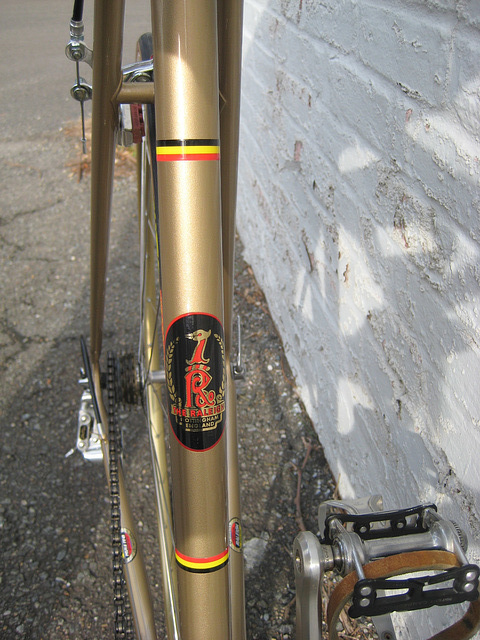 An exceptionally early (quite possibly the first) Reynolds 753 time trial special frame built in February 1976 by Raleigh SBDU, Ilkeston. The "H31" bb stamping designates this as only the 31st special order frameset built by the SBDU.

Built up with some of the lightest period correct components c. 1976, the complete machine weighs 17.6 lbs

description from the eBay auction:

Raleigh SBDU Ilkeston worked very closely with Reynolds and in particular on the development of Reynolds 753 tubing. This is not surprising as both Raleigh and Reynolds were both owned by Tube Investments (Ti). Reynolds first produced 753 tube sets in 1974 and Dave Lloyd took the RRA straight-out 50 mile record in October of that year on a 753 frame. 753 frames were then used by Roy Schuiten in the 1975 Paris-Nice and then along with other selected Ti Raleigh team members he rode 753 frames for most of the subsequent races in that year. Roy Schuiten also rode a 753 frame in his world pursuit championship win and also for his wins in the Grand Prix des Nations at Lugano in 1975. 753 frames used at this time by the Ti Raleigh Team were badged Reynolds 531.

Reynolds first announced the production of 753 to the general public in November 1975. The launch was timed to coincide with Roy Schuiten’s hour record attempt in Mexico for which two special 753 frames were made by Raleigh SBDU Ilkeston. They were also painted with a new light weight gold paint and lacquer.

However, Raleigh SBDU never geared up to supply frame sets and accept orders from the public until January 1976. By this time Reynolds, supported by Raleigh SBDU, considered that the technique required to braze 753 tubing had been properly developed. In addition Reynolds were not willing to supply frame sets to frame builders until they had been specifically approved by Reynolds as having acquired the necessary skills to safely braze the tubing. This situation resulted in Raleigh SBDU Ilkeston being able to supply 753 frames to the public 3 months or more before any other frame builders.

Raleigh SBD at Ilkeston required a minimum of 3 months from date of order to build a frame. This frame supplied on 24 March 1976. I have the original sales receipt. Raleigh SBDU Ilkeston frame numbering started at around number 500 at the beginning of 1976. However, the numbering sequence did not distinguish between tube set types so for example a Reynolds 531SL frame could be numbered say 610 and a 753 frameset numbered 611.

When the original owner purchased the frame he was already competing as a veteran in his mid 50’s. He achieved significant success on the frame in the Veterans Best British All Rounder with several finishes in the top 5. Copies of pages from Cycling Weekly detailing some of the owner’s success will be provided to the buyer along with the original receipt for the purchase of the frame. A photo of the owner using the frame in a time trail competition in 1980 will also be provided along with copy correspondence with him.

The frame was repainted some time ago but in exactly the same colour and identical Raleigh transfer set as when first purchased with the help of the original first owner."