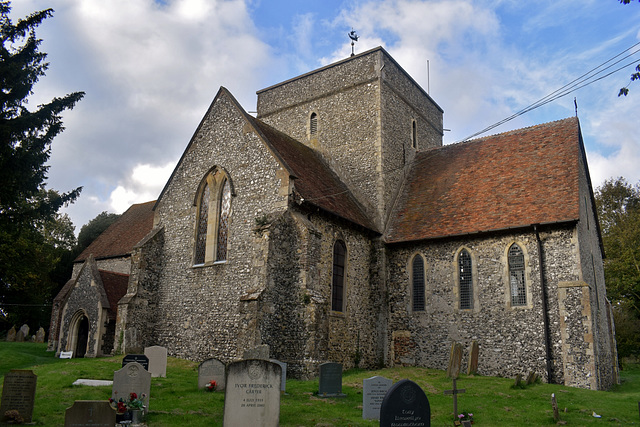 Northbourne comes from the Old English ‘nord’ meaning ‘northern, north’ and ‘burna’ as a ‘stream’; therefore, ‘north stream’. The Domesday Book chronicles Northbourne as Norborne.
Northbourne parish church is a Grade: I listed building, dedicated to Saint Augustine. The Saxons built the first church on this site. The Normans rebuilt it as, one of only a few, cruciform churches in Kent in the 12th century. They made some alterations in the following century, particularly to the windows. In 1711, Mathew Bagley cast and hung a ring of five bells in the tower. In 1800, Edward Hasted described St Augustine’s church as a ‘large goodly building, consisting of a nave, chancel, and transept, having a large square tower in the middle, which has probably been much higher. There are five bells in it. The church is built of flint, with quoins, door, and window cases of ashler squared stone; some arches of the windows are pointed, some circular, and some with zigzag ornaments. The western arch of the tower is pointed with triple dancette ornaments; the others circular’. In 1865, the Victorians added the porches and carried out restoration work to the chancel. Alfred Bowell augmented the bells to six, with a treble, in 1911. This Church is in the Eastry and Woodnesborough Benefice in the Diocese of Canterbury.

This is a "Topsy Turvy" Church the front which faces open countryside is exactly the same as the back, this is the "back" where the entrance is!


MY THANKS TO ALL WHO VISIT AND COMMENT IT IS MUCH APPRECIATED.

Walter 7.8.1956, Ernest CH, photosofghosts, Nouchetdu38 and 7 other people have particularly liked this photo