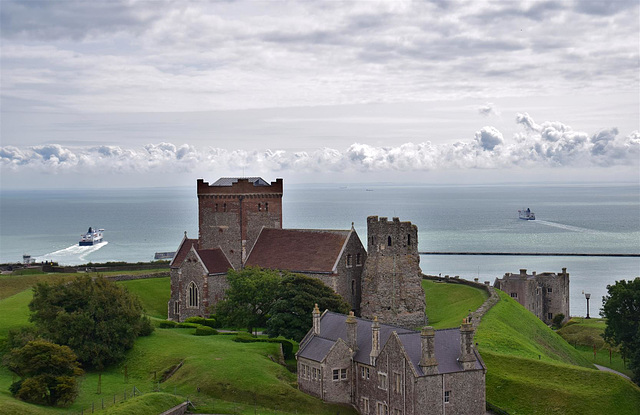 The Church is St Mary-in-Castro (explanation below) and next to it is the Roman Lighthouse.

There are records of a church being built 'within the castle' (Latin 'in castra') by Eadbald of Kent in the 630s. However, it is unclear whether this means within the Saxon burgh (usually dated to later than 630) on the Eastern Heights, or within the ruins of old Roman fortifications in the valley. The large, late-Saxon cemetery around the present church does suggest the existence of a c.600 church, but not definitively. Whether or not it had a predecessor, the present Saxon church was built on the Eastern Heights around AD1000. It is immediately adjacent to the surviving eastern pharos, which was used as a source of spolia (spoil): Roman tiles can be still be seen in the church fabric, particularly in the window arches (usually of stone), and flint and tile from the pharos is used throughout the church's walls. The plinth that projects out from beneath the church and on which it stands, however, is of new stone. The church is cruciform with a central tower the same width as the nave but broader than the chancel and transepts. The nave has no aisles. The door arch is the earliest to survive in any standing church in England.

The building next to the Church is possibly the oldest building in England as it is a Roman lighthouse constructed in the 1st Century AD the top stage was reconstructed 1415-1437. Complete with Roman lightning conducter!!!!

The coast of France is some 20.7 miles from Dover or 33km. I managed to catch 2 ships sailing across the pond!

Taken from the top of the great tower Dover Castle.

My Thanks to all who visit and comment it is appreciated