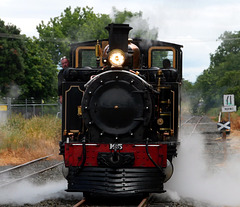 We had a great time riding on the railroad in Gisbourne, NZ. This is just one of many photos I took. In this case, the loco is arriving to pull us back to the port area. Image processed with GIMP. 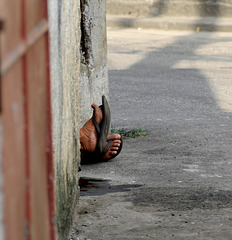 Taken during our cruise through Rio in 2011. We were touring the interesting district across the bay from the more famous parts of the city. Looks like someone was taking a break. All I could see were the feet, so there they are. Taken with Nikon D700, processed with GIMP. 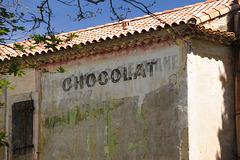 Advertisement on the wall of a cafe along the Canal du Midi. I do like chocolate... Image processed with GIMP. 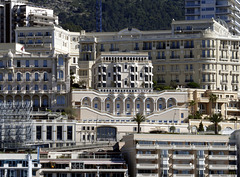 Looking up the hill that is Monaco. Many buildings, and many fences. Impressive. Image processed with GIMP.

In 2016, we had the pleasure of visiting Avery Island, Louisiana, home of the Tabasco sauce factory. Their gift shop has amazing things, and we had to control ourselves and only buy a few items. These "paint cans" contain chocolate infused with the tabasco sauce. Image processed with GIMP. 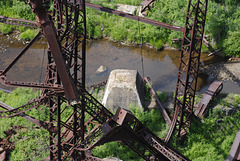 This classic railway trestle in central Pennsylvania, was abandoned by the railroad. After that, it was used for various railroad excursions, until a major storm caused most of the bridge to collapse into the valley below. This image is taken looking down from the end of the existing bridge (now a state park) at the wreckage in the valley below. Image processed with GIMP. 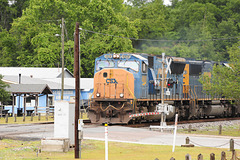 The Folkston Funnel is a section of track where many of the east coast US trains pass. There is a visitors center set up, and you can spend quite an interesting day of train watching. 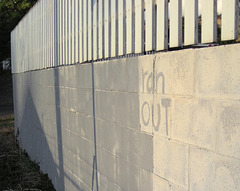 Took this in our neighborhood when we lived on Maui. The home owner tried to paint the retaining wall, but RAN OUT of paint. They had just enough paint left to tell us what happened.

Looking across to our neighbor's house on Maui, 2004. This was one of the earlier digital photos we took. Today we enjoy looking back at the wonderful warm day on Maui, while it is plenty cold here in South Dakota. (Many stories about our neighbors and neighborhood back then....) Image processed with GIMP.

The entrance is made up of a huge wall of rock cemented together. This used to be the main entrance, but the road bypasses it now. Image taken with the Panasonic GX85 and processed with GIMP.

Taken while on the Canal du Midi, entering Beziers, France. Each of these lock door sets has a walkway with railing, the bridge over the canal has a fence, and the parkway surrounding the canal has fences. Quite a pattern! Image processed with GIMP. 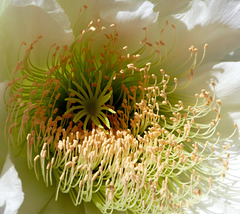 Taken in Arizona near where we used to park our RV. This is an open bloom of the "cereus" cactus in the RV park. 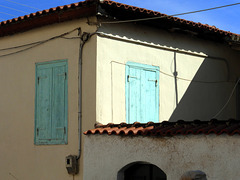 We had a very nice "wander" around the port in Pylos, Greece. Along the way, I saw this house, whose shutters offered their own colors with the blue sky. And, of course, wires. Image processed with GIMP. 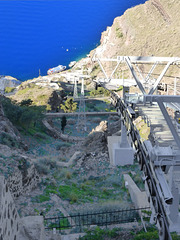 A view down the cliff from the top station of the Santorini Cable Car. The deep blue of the water is very impressive. Processed with GIMP. 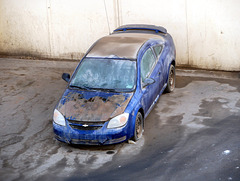 Just Park Next to the Wall, It'll Be OK (HWW)

Saw this seriously decayed car parked near our cruise ship in Dakar, Senegal. Looks like someone parked it, and forgot it. 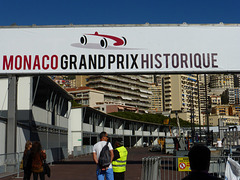 Taken during our cruise in 2016. We walked around the harbor a bit, and saw they they were setting up for the "Grand Prix" (for historical race cars). 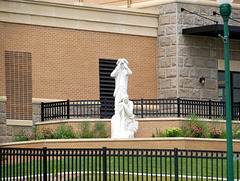 This building is near the river. Lewis and Clark appear to be scanning the horizon for further discoveries. Taken with the Panasonic GX85 and processed with GIMP.

Taken at a car show in Sioux Falls, South Dakota. There was an interesting mix of cars, but the 1957 Chevrolet seems to have been pretty popular, but there were a couple of Corvette's there, too. Taken with the Panasonic GX85 and processed with GIMP.
243 items in total
Jump to top