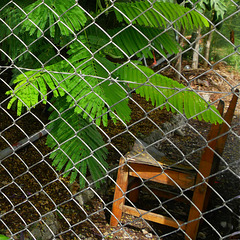 Another fence we saw in Tonga. In this case, there was a chair sitting in a very remote spot in someone's back yard. Image processed with GIMP. 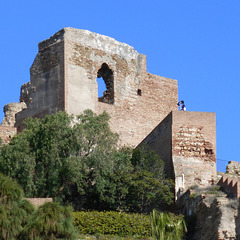 Fortress in Malaga, Spain. This is a square crop of one of the shots made during our visit. Image processed with GIMP. 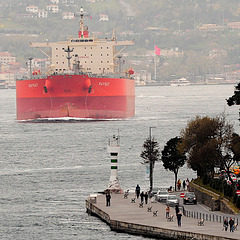 Taken during that quick visit to the Bosporus on our cruise in 2016. This is one of the few areas I photographed that had benches for people to sit and enjoy all of the activity on the water. There were a lot of tankers in this narrow area. Image processed with GIMP. 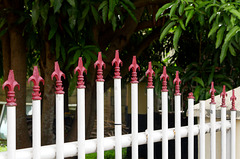 Saw this nice iron fence in Tonga, as we walked around town. Yes there are some missing spear finials. (It took AGES of web searching to find out the name of those pointy things at the top...) Image processed with GIMP. 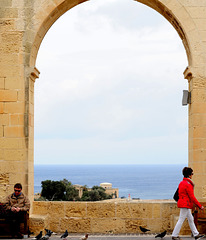 View from the Upper Barrakka Gardens above the harbor of Valletta, Malta. Looking out over the Mediterranean. Image processed with GIMP. 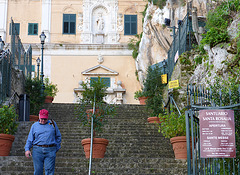 Santuario di Santa Rosalia, outside of Palermo. We visited this area as part of a local tour. The views in this area are wonderful, high above the noise and crowds of Palermo itself. I found Sicily to be a fascinating section of our cruise, and enjoyed all of our shore visits. Image processed with GIMP. 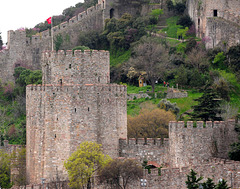 Along the Bosporus (HWW)

Taken as we cruised the Bosporus. These fortifications are quite impressive. (We were not allowed to leave the ship in Istanbul, so this cruise up to the Black Sea was a "consolation prize". The views are very interesting, and apparently cruise ships rarely travel this far above Istanbul.) Image processed with GIMP.

Taken in Skagway, Alaska during our cruise/visit in 2000. We did not take the train that day, but were able to walk right up to the steam equipment as it was prepared to ascend White Pass. Print film, professionally scanned, enhanced with GIMP.

This is a snapshot from a collection that was generously shared with me. The photos were taken in Agate Beach, Oregon in 1918, when this fellow was in the Army. He was a "Spruce Soldier", the workers who logged the spruce lumber in the Pacific Northwest for the War effort. To get to the spruce stands, these soldiers created roads and railroads, usually by hand. See: swansongrp.com/spruce.html Image processed with GIMP.

During our stay in the Canary Islands, we stopped and looked around Tenerife. In the harbor was the "C. Columbus 2" a cruise ship from Hapag-Lloyd. This ship design was very familiar to us, as we cruised on a "sister" of this ship, one of the old R-ships. When Renaissance went broke, they sold their ships to a number of other cruise lines. Image processed with GIMP. 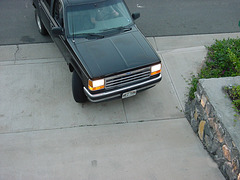 Hawaiian Wall and Our Car (HWW)

Taken with our very first digital camera, a Sony Mavica (used floppy disks to store the images). That was our car (Ford Explorer), entering our driveway on Maui. The stone wall is typical work of the Tongans in Hawai'i. We ended up with 3 such wall projects. Image processed with GIMP.

The "super loo" in Taupo, New Zealand. They advertise it from many kilometers away. Definitely a "destination". We made use of it during our visit in 2001. We gave it an Excellent rating! Image processed with GIMP. (PS: the camera used was our first digital camera, the Sony Mavica; the one that recorded photos on a floppy disk.) (PPS: there was a superb restaurant near this in Taupo. Need to look it up....) 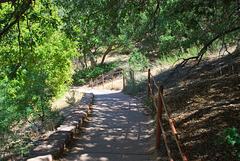 Taken in the Zion National Park. I enjoy trying to get the right perspective and view of walking paths. This one had the right amount of shade. Image processed with GIMP. 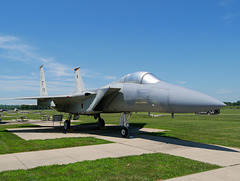 Outside display of a F15A fighter at the Air Force Museum in Dayton, Ohio. Image processed with GIMP.

Taken on a road trip several years ago. We now live in South Dakota. Image processed with GIMP. 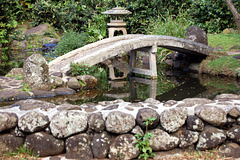 Taken quite a few years ago, during a photography class outing. We visited an area of Iao Valley that is missed by many tourists. There is a complete Japanese-style water garden deep into the valley. This bridge and native stone wall are just part of the display.

This is a static display of a Big Boy steam locomotive, the largest ever built. You can view our videos of a relative of this engine passing by at: swansongrp.com/4014 and www.ipernity.com/doc/2543754/49660724//in/album/1261348 The park is located in Cheyenne, Wyoming. Note the well-placed bench for enjoying the view of this remarkable machine. There are others in static display throughout the U. S. Of course, I also have photos of the 4014, which was restored and has been running through the U. S. starting in 2019. Thank you for all of your kind comments. Yes, this was the largest, with a combined weight (tender and engine) of over 1,000,000 pounds. It did indeed create the tractive force of two locomotives, and was created partly to prevent the need for a "double header", where two locomotives were tied together to provide more pulling power. One crew could operate this "double sized" engine. These engines were built during WW II in order to haul heavy freight over the Rocky Mountains (primarily Cheyenne, Wyoming to Ogden, Utah) at a uniform speed of 45 miles per hour. That is, they maintained that speed up steep mountains and down steep canyons. Other compound locomotives were built at that time, almost as massive as the "Big Boys". In addition, very powerful non-compound road engines were built at the same time, such as UP 844 (which see). Those engines were designed to haul pretty much anything, and could achieve speeds of 90 miles per hour. Image processed with GIMP.
243 items in total
Jump to top