Latest posted Navigate on the map Photos with specific people Most appreciated Most viewed Most commented Search by keywords Search by date
See also... Robert Swanson's
favorite photos All the photos where
Robert Swanson appears 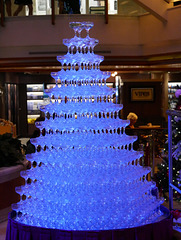 We were on a Holiday cruise from Melbourne, Australia to New Zealand and back. During the cruise, we celebrated Christmas, and then arrived back in Melbourne just in time for their spectacular New Year event. This was the "champagne pyramid" onboad ship, waiting for the big night. Image processed with GIMP. 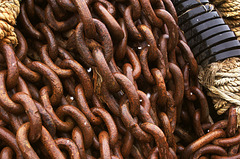 These chains were used in the whaling factory on South Georgia. That area is now being converted to an environmental display. We visited South Georgia on our 2008 cruise, one of the very few full-sized cruise ships allowed to stop there. (Most of the ships that come in are the small, adventure type ships.) It was the equivalent of August in the Southern Hemisphere, and it was snowing the whole time that we were visiting. 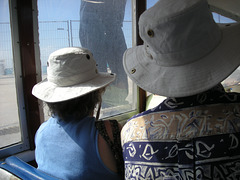 We are big fans of our Tilley hats. When we see other folks wearing those, we just have to take a picture. These people were on the tender as we visited Grand Cayman in 2008. 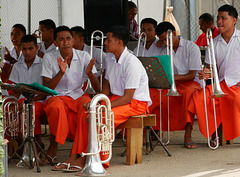 We were entertained in Tonga by singers, dancers, and musicians. Here the brass band is waiting on the benches for their turn to perform. Image processed with GIMP. Forgot to add that these people were probably seriously affected by the recent volcano eruption near Tonga (including a tsunami). Please keep them in your thoughts.

Have a great weekend! This burrito was our special lunch today. There was a Cinco de Mayo event in a local park, and there were dozens of food trucks around. We saw a fellow eating the biggest burrito I've ever seen, and asked him where he got it. He pointed out the truck, and off we went. My wife and I had to share this one, it was that big! Image processed with GIMP. (oh yeah, pork, black beans, rice, and yes, potato chips(!)) The red salsa was nicely spicy.

We took a great cruise in 2019 on the Oceania Marina. While walking around this elegant ship, we saw a number of decorations, including this vase. Image processed with GIMP. 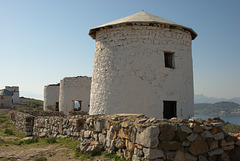 In the heights overlooking the port of Bodrum, Turkey, we visited these interesting windmill structures. Image from Nikon D80 in raw, processed by RawTherapee, later by GIMP.

The front area of the Baldwin Home Museum in Lahaina. We were there around the holidays, which explains the Christmas decorations on the street light poles. Looks like a nice place to sit and enjoy the endless parade. Image processed with GIMP. 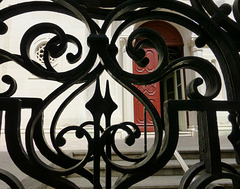 During one of our visits to this remarkable town, I spotted the red church door through the iron fence that surrounded the church. Image processed with GIMP. 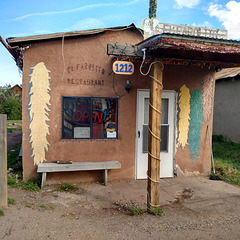 We were told about this place by some other folks at the RV park where we were staying. The small town of El Rito, New Mexico is pretty remote, but very interesting, and worth a visit. The highlight for us was enjoying a dinner at El Farolito. This tiny restaurant consistently wins statewide awards for their food. They were very friendly and welcoming. Image processed with GIMP. 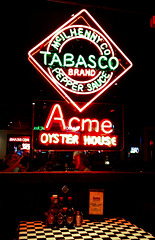 We visited the New Orleans area in 2016. Had lunch at this branch of the well-known oyster restaurant, Acme Oyster House. I used the phone to grab a picture of the neon lights and table in the restaurant. About an hour later, a tornado ran through the same area, causing much damage and some deaths. Makes you think. Image much processed with GIMP. (The Mandeville, Louisiana, location we visited was later closed, but there are still plenty of branches of this restaurant open in the New Orleans area, as of 2022)

When we took this amazing elevator up to the gardens and fortress in Valletta, Malta, I wanted to get a good photo of the lift system. However, my main camera didn't make panoramas. So, I made a "vertical panorama" with the phone. Image processed with GIMP. [View on black] 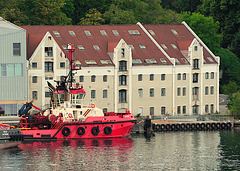 ALTERNATE image processing: We saw several such oil service ships in Stavanger. The original, posted to Happy Fence Friday, seemed a bit too "blue" to me. So, off to GIMP again, to see about some color manipulation. I hope that this image is a bit "warmer". It should be noted that I was trying new camera setups when these photos were taken, and this might be one where the "default" color temperature was set in my Nikon D700 camera. I have noted that many photos from that time period were, by default, cast with more blue than I like to see. HOWEVER, the ship still looks "pink", much as in the original photo. You can see the "pinkness" when contrasting the hull color with the red of the safety gear, and international "orange" of the life ring near the pilot house. The original posting: www.ipernity.com/doc/2543754/51259846

Just one of the oil servicing ships that we saw in Stavanger. Image processed with GIMP. (Besides the fence, there is a man on the pier, fishing.) (Oh yes, the color. I looked up the ship online and it seems to be painted quite red these days. Apparently in 2014, it was more pink (??!)) I didn't like the blue cast, so fiddled a bit more in GIMP, and have an alternate image to offer: www.ipernity.com/doc/2543754/51259880 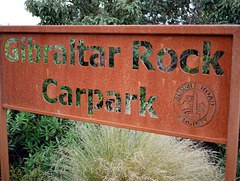 This naturally-rusted sign was for a carpark where we stopped on our tour of Christchurch, New Zealand. This very scenic area is south of Christchurch on Summit Road. Image processed with GIMP 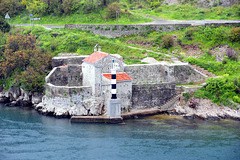 Our cruise ship passed this lighthouse on the way into Kotor. While the modern ATON is definitely a light, the original structure may have been a customs building or such, perhaps guarding the approach to Kotor. The walls are quite impressive for this small enclave nestled between towering mountainsides and the water. Image processed with GIMP.

Along the Bosporus (HFF)

During our cruise along the Bosporus, we saw some really big homes. Some of these had been palaces, we were told. Not sure on this one, but quite a pile. Image processed with GIMP. 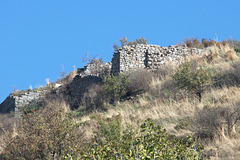 More ruins on the hills above Ephesus (which are great ruins in themselves.) Image processed with GIMP.
243 items in total
Jump to top