← All with the keyword: engine 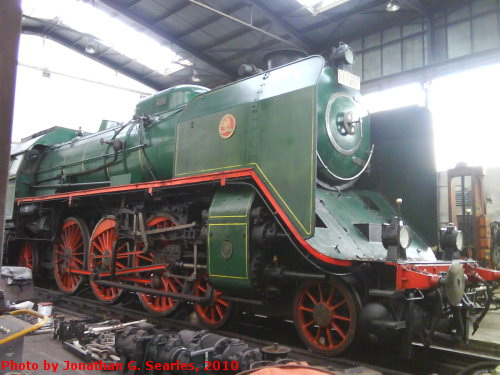 Normally, to tour the engine shed (or back shop, I'm not sure what the correct term would be in this case), you need to make an appointment, but I got around this problem by shooting this through the door. I'm assuming that #387.043 is operable, otherwise it wouldn't be here, and in any case the drivers and valve gear were wet with oil. The museum claims its been out of service since 2001, but maybe they intend to change that, or already have. #387.043 is a Class 387 Pacific with 1546kW (2074 horsepower) of power, and a top speed, officially sanctioned, of 120Km/h, making it more impressive than most of the other express power at the museum (the museum claims 110Km/h, so maybe they've downgraded it), in spite of it being pretty old. #387.043 was built by Skoda in 1937, and the 43 locomotives of the 387 Class were built between 1926 and 1937, so this would make it one of the last ones built. Strangely, the Czechs call this locomotive a "Mikado," in spite of it being a 4-6-2 rather than a 2-8-2. They cite the short chimney as the reason, but that seems odd given that the Mikado name specifically denotes a 2-8-2 under the Whyte system (although as far as I know Whyte himself didn't officially endorse the names, just the configurations).
Suggested groups:
Comments