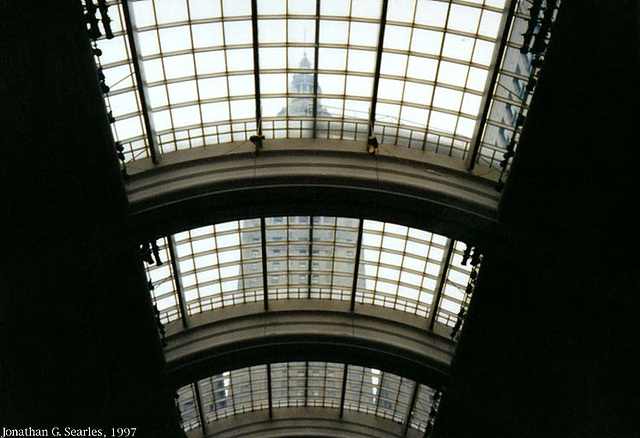 In the U.S., few other buildings than rail stations (except for some post offices, government buildings, and churches) were built to quite the same spectacular standards. This amazing fog-enshrouded tower is Cleveland Union Terminal, or Tower City as it's now known, originally built in 1930 for the New York Central Railroad. Wow... When I first saw it, I was astonished to know that it still existed, as I had only seen it in old photos, and American cities and landlords have an unpleasant habit of destroying their most beautiful buildings in favor of strip malls and parking lots. Not this one, though. C.U.T. is so huge, at 216 meters (708 feet) in height (not to mention its unusually large footprint for even such a tall building), that when it was built it was the second tallest building in the world, and the tallest building outside of New York City until 1967. This is my most "clever" shot of C.U.T., taken from the concourse, through the glass roof, which illustrates the sheer scale of the place. A number of major world rail stations have glass ceilings, glass trainsheds, and the like, although I'm not going to try and guess how high this one is. What's most impressive is that, high as it is, you can see the main office tower soaring above and behind it.