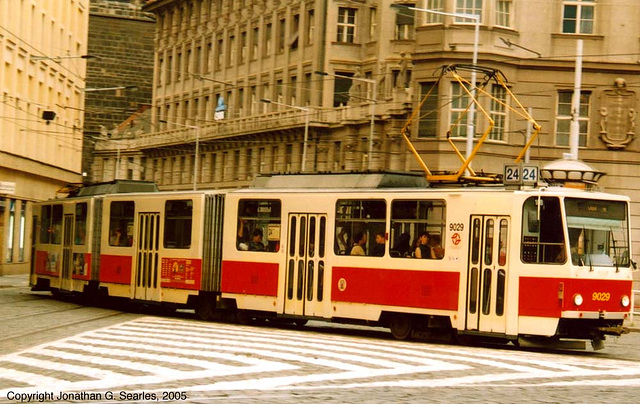 I took this shot at the junction at Senovazne Namesti (Senovazne Square), where the line going to Hlavni Nadrazi (the main train station) is behind me in this picture, the line into Vaclavske Namesti (Wenceslas Square) is straight ahead, and the line to Masarykovo Nadrazi (Prague's oldest mainline train station) is off the curve to the right. The sweeping curve (by tram standards anyway) gives us the chance to better see an articulated tram in action, in this case a Tatra KT8D5 from 1987, which is still in service today. The whole KT8 fleet is currently being rebuilt with LED lights, new computerized route displays, CCTV for both greater security and improved driver visibility, and many other modern features that were science fiction in the Communist Czechoslovakia of 1987. The designation is being called KT8D5RN2P. #9029 was, however, still unrebuilt and original when I took this. The big number 24 on the roof is actually the route number, rather than the tram number.
Suggested groups:
Comments