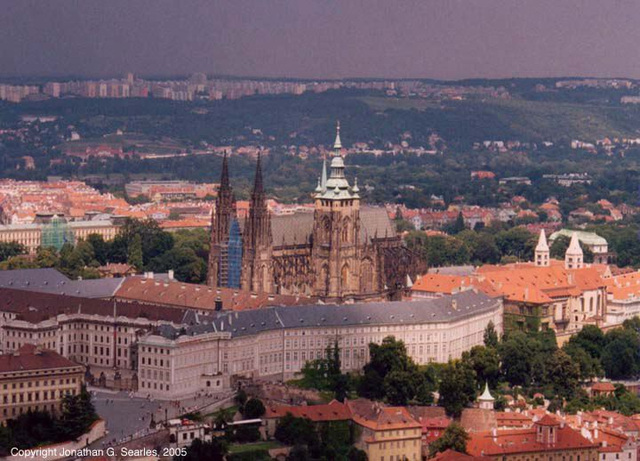 The original St. Vitus's Cathedral dated to 925 AD, although it should be noted that none of the original Romanesque basilica remains. It was replaced in 1060 AD by a triple-naved basilica with twin steeples, and again by the current cathedral, which was built between 1344 and 1929. Most of it, however, was constructed by the Baroque period, making it the only known church that was started as a Gothic cathedral, but was Baroque by the time the bell tower was being completed!!! If you look carfully, you'll notice that the bell tower (with the copper dome and the clock) has an observation deck, too, which is open to the public. Surrounding the castle is a series of fortifications called Prazky Hrad, essentially Prague Castle, although the castle doesn't have, and has never had, a keep. It was meant to be symbolically unconquerable, as a castle wasn't considered conquered until the keep had fallen. In any case, I like this shot because of the storm clouds in the background contrasting with the sunlight on the cathedral in the foreground. It's dramatic to my eyes, anyway.
Suggested groups:
Comments