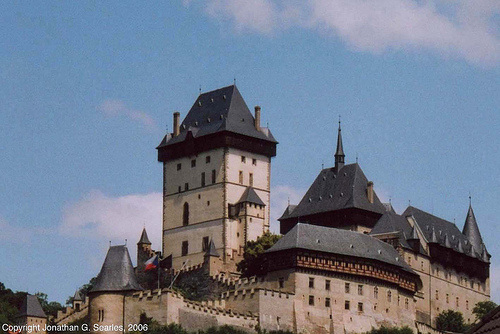 Hrad Karlstejn was built in 1348 on the orders of Karluv (a.k.a. Charles) IV, arguably the most-loved of all Czech kings, who also held the position of Holy Roman Emperor. In addition to being a vacation home for the royal family, Karlstejn was also used as a refuge from war, not only for Karluv's family but also for his collection of holy relics, as well as the crown jewels. The historical musical Noc na Karlstejn (about Karluv IV) is set in Karlstejn, and today, Hrad Karlstejn is the best-known castle in the Czech Republic after Prazky Hrad, and is a favorite tourist destination, even if the village of Karlstejn is otherwise insignificant (although the castle makes it a tourist trap anyway).
Suggested groups:
Comments