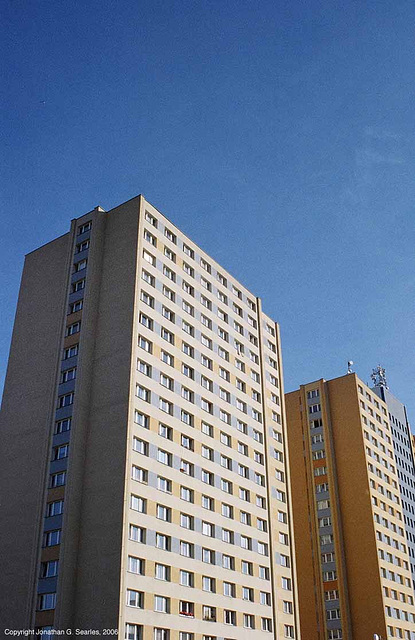 I took this in Sidliste Haje, Prague. Sidliste Haje was a Communist-era housing project intended to house as many of the "proletariat" as possible, in the most modern and luxurious conditions possible (acceptable?) under the Communist system. Surprisingly, the project seems to have succeeded, at least over the long-term. Almost all of the Sidliste complexes consisted of "Panelak" apartment blocks like these, built from standard designs and prefab materials. Many people say that they're ugly, but they're surprisingly well-equipped and insulated. In addition, many have been refurbished to a degree that would have been unimaginable pre-1989. Some of them, as in Sidliste Barrandov, are even high-rent. For that matter, most of Haje is in like-new condition, if you ignore the (post-1989) vandalism, and many Sidliste projects have even been expanded post-1989. I'm not aware of whether these are original Panelaky refurbished, or new builds, but the design is more or less the same. For all the criticism of this type of architecture, the Czechs have had no problem with continuing to build them in the post-Communist era.