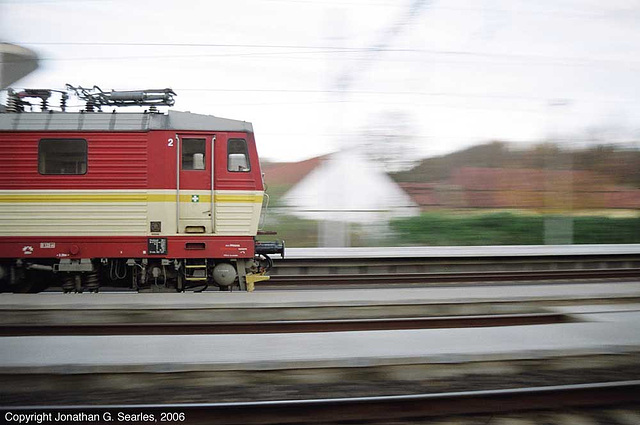 I saw this coming from a long way off, but didn't get the classic angle of it bearing down on me, although I regretted it somewhat later, as I never got the number. This Ceske Drahy Class 371 electric was pulling a MAV (Hungarian State Railways) Eurocity from somewhere in Germany to Budapest, via Prague, so it obviously wasn't going to stop in Roztoky, and I wanted to be sure that I got this pan shot. I set my camera up, passed up the offset head-on view, and swung my body around for the pan. It worked perfectly, and now I have this, which may be my best pan shot ever. I hope you like it.

CruisAir has particularly liked this photo

I like this shot, blur and composition are excellent.
14 years ago. | Permalink

Hello! I'm a group administrator of Transport. It would be great if you would add this doc to our group. Thank you!
14 years ago. | Permalink