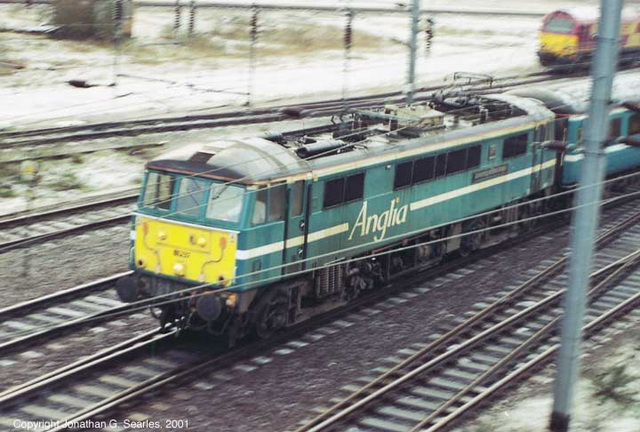 I took this shot on a slightly snowy day in 2001 during my second to last full day living in Norwich, England. I figured I wouldn't get back anytime soon, so I shot a bunch of photos so that I would have them. In reality, I returned many times to visit friends, but I didn't know I would do so at the time. This is one of my best shots that day, a pan of one of Anglia's Intercities departing Thorpe Street for London Liverpool Street. These Class 86 electrics were originally designed in the mid-1960s for use on the newly-electrified West Coast Mainline, but when the Great Eastern Mainline was electrified in the 1980s they were mostly cascaded to the Great Eastern. When I first went to school in Norwich in 1998, nearly all had been transferred to this service, with few left on the West Coast, and now all are on the Great Eastern, if I'm not mistaken. I rode these trains many times, of course, and I would ride one out of Norwich two days later. As a point of side interest, the blurred locomotive in the upper right is a English, Welsh, & Scottish Class 67 diesel, a 125 m.p.h. locomotive used mainly on mail trains. It turns out that I was wise to catch this, as I don't think I got another shot of it before it was scrapped at Cardiff in October of 2004.
Suggested groups:
Comments