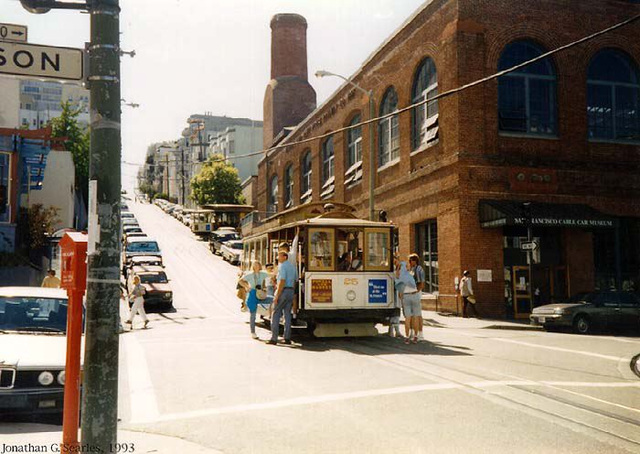 Cable Cars aren't universally considered trams. That's the purpose that they serve, though, for all practical purposes. The main thing that makes them different from others is that standard trams are powered through overhead cantenary that powers electric traction motors that power each axle, whereas Cable Cars are pulled along by a cable underneath the street. You can check out www.cablecarguy.com for more technical info. In any case, I got my chance to ride and photograph the San Francisco Municipal Railway, the last of the traditional Cable Car systems, in 1993. All of the other surviving systems operate on the less-standard "funicular system," used on steep hills. Unlike a standard cable car system, a funicular is limited by the fact that the cable is connected to both cars (all TWO! :-)) semi-permanently, so while one goes up the hill, the other goes down. This would never work in S.F., though, since it's a full-service system with many cars running on different streets. Therefore, the cables are controlled from a central cable house, pictured here on the right, which is also the San Francisco Cable Car Museum. The cars then can run semi-independently of the cable house's whims, controlling their access to the constantly moving cables under the street through the use of a "grip," that is sort of between a pliers and an automotive clutch. As such, cable car drivers are called "grip men (or perhaps women)."
Suggested groups:
Comments