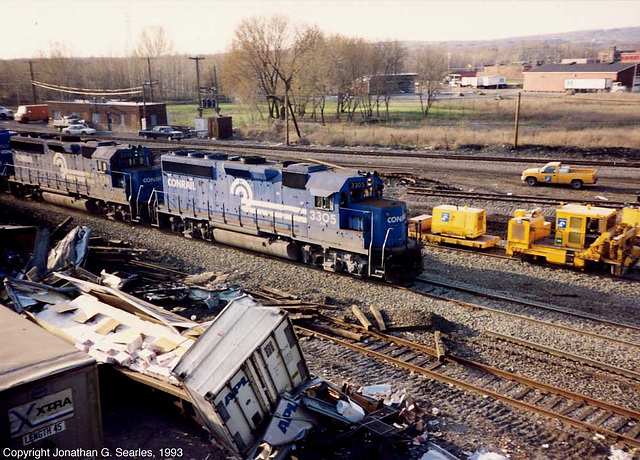 I took this shot during the aftermath and cleanup of a major wreck in Utica, NY involving a loaded stack train headed by G.E. Dash 8s. The Dash 8s are gone by this point, with the smashed well cars and containers bulldozed to the side, and one track has been reopened, letting these GP40-2s through, rare even by 1993 standards. The wreck, according to the news reports, was deliberately caused by a group of teenagers, who were subsequently arrested for the crime, but the results of the case were kept secret because of their ages. One person, perhaps not the smartest person in the world, blamed it on the railroad, saying something along the lines of "I don't know why they put the railroad so close to the housing development." The housing development where the teenagers came from dated to the 1960s, the railroad to the 1830s.

Thank you to Ben S for marking this photo a favorite!! :-)
8 years ago. | Permalink