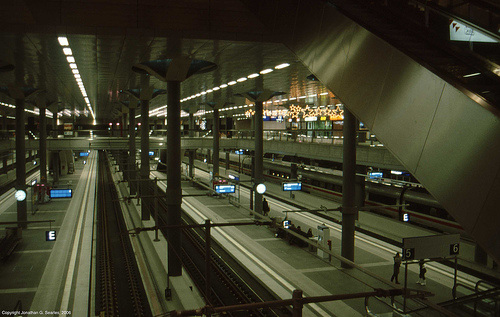 After I arrived in Berlin, there wasn't much to do for a few hours, so I walked around taking photos before getting the next train #NZ242 for Bruxelles-Midi, at 2146. Berlin Hbf was recently restored and rebuilt massively, and bears little resemblence at this point to the steam-era station. It's as much mall as station, like Washington Union, Cleveland Union Terminal (but with more trains), London Liverpool Street, or London Waterloo in this respect. The food isn't too bad, and the shopping is so-so. I didn't find anything worth buying.

Thank you to EinTon for marking this photo a favorite!! :-)
12 years ago. | Permalink