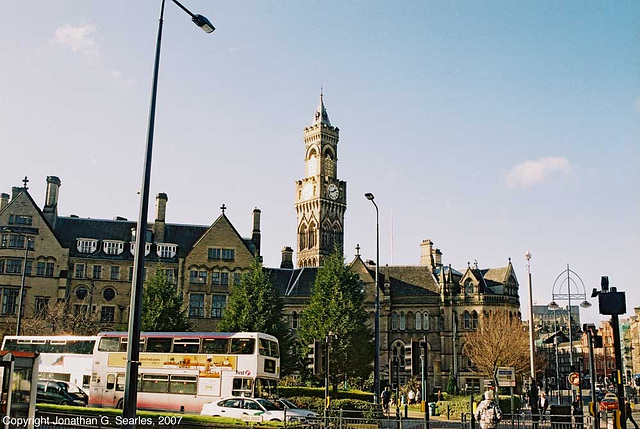 This is the Bradford City Hall notable for its clock tower and the fact that it features a statue of Oliver Cromwell, unusual since he wasn't popular and is often considered illegitimate. As with the Great Victoria Hotel photo, this shot regrettably suffers from glare, whiting out part of the clock tower. Also notable in this photo are the double-decker buses. Don't believe the media when they tell you that they're gone. :-) Transport For London pulled their fleet of 50-year-old AEC Routemaster double-deckers out of service a year or two ago, and then the media ran with it and claimed that all the double-deckers were gone. In actual fact, double-deckers survive in various forms all over Britain, even in London. It's just that London doesn't have Routemasters anymore. These don't look like Routemasters, though. Does anybody know what they are?
Suggested groups:
Comments

No! But David Slater (Spoddendale) is more likely to! :-)

Double Decker Buses are still running - newer versions now - in 2018 (and still getting in the way)!

Bradford's shops are emptying though! :-(
3 years ago. | Permalink