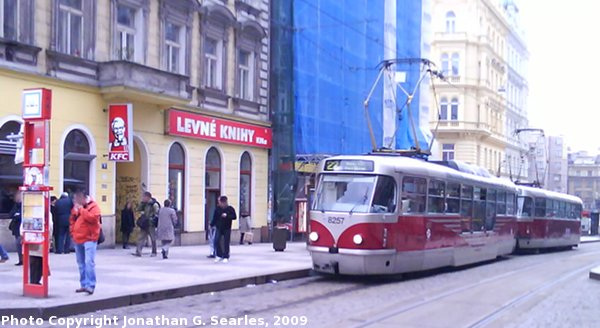 These low-floor Tatra T3R.PLF's have been in service for about as long as I've been in Prague, but until this year they were relatively rare. Now they're very common, being yet another attempt by DPP to get more out of the old T3 platform even as new Skoda 14t trams are being delivered. The T3M's are also being upgraded in less radical ways, to the R.3 standard, and many of the PLF's are coupled to them as trailing units. The paint scheme on the PLF's is also unique, other than for the T3R.3's that end up as trailing units, of course. The irony is that it's one of the more retro schemes on the system, in spite of the red and cream scheme used on the other T3's dating to the 1910's, long before T3's were even developed!
Suggested groups:
Comments