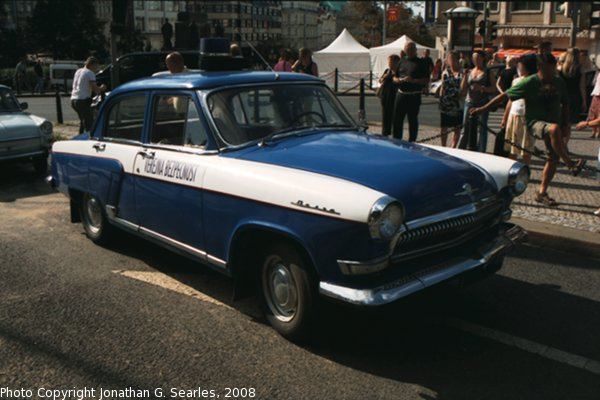 This is a 1960's-era (I don't know the exact year) Czech police car, although it's a GAZ-21 Volga, a Russian-made car. Contrary to popular belief, Volga buses and trucks are still made today (cars were made until 2007), but that's another story. The most interesting thing about this car for a Westerner isn't its Russian manufacture, necessarily, but that it doesn't say "policie" on it, the Czech word for police. In the Czechoslovak Socialist Republic, calling a police officer was considered politically incorrect (If I'm not mistaken, some people were jailed for calling the police the police.). In a Communist regime, the police, an instrument of capitalist repression, were said not to exist. Instead, there was the "Verejna Bezpecnost Sluzby," (I think I spelled that right, but correct me if I didn't) or the "Public Security Service." Police officers weren't police officers, but "security officers," and so on. Later Verejna Bezpecnost cars (usually Skodas) in the 1980's were repainted into a white paint scheme with yellow fenders that was only marked with the large letters "VB," on the doors, and the car number on the roof. The car that you can see behind this Volga is a Skoda 1000MB, which was the standard Communist-endorsed people's car of Czechoslovakia in the late 1960's.
Translate into English
Suggested groups:
Comments