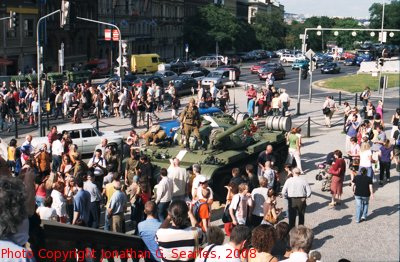 Outside of the museum, they had a number of larger temporary exhibits of what would have been seen on the streets in 1968. One of the most iconic of the artifacts from that time was this Russian T-54 main battle tank, in the center, as well as a 1960's-era Skoda 1000MB saloon (on the left behind the tank), and a 1960's-era Volga police cruiser (directly behind the tank).
Suggested groups:
Comments