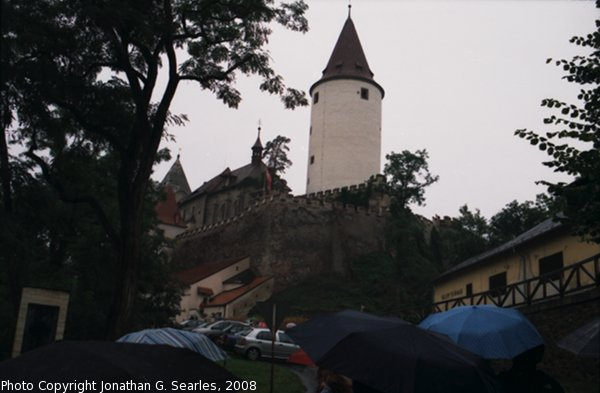 This was my second trip to Krivoklat, but unfortunately, just like the first, the weather was on the gloomy side. Nevertheless, to recap... Dating to about 1100, Hrad Krivoklat was rebuilt by Otakar II (1233-1278), Vaclav IV (who also spent his childhood here, born 1316, died 1378), and Vladislav (1456-1516). In 1422, it was involved in the Hussite Wars, and damaged, was subsequently used as a (brutal) prison by the Habsburgs, and then came into the ownership of the Furstenburg family. The Furstenburgs, who acquired the castle in 1773, restored it after it was badly damaged by a fire in 1826. The Furstenburgs lost control of the castle in 1929, although I've had a lot of trouble finding information on who had it 1929-1948. It's clear that since 1948 it's been owned by the government, first because the Communists nationalised all property, and next because the castle is now a National Cultural Monument (so as far as I know that implies public ownership).
Suggested groups:
Comments