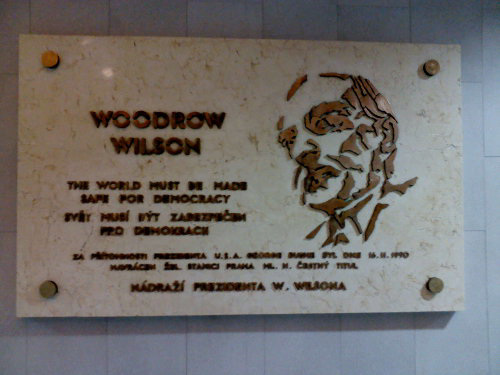 While I was on my way to my train, I spotted some of the progress on the Hlavni Nadrazi restoration, which had been going on for several years. The last portion of the station to undergo restoration was the historic "Fantova" section from the 1910's, which had originally been called Nadrazi Franz Josef in 1914. After U.S. President Woodrow Wilson had been instrumental in attaining Czechoslovak independence in the post-World War I negotiations at Versailles, the station was rennamed Wilsonovo, along with the street in front. After the Nazi invasion in 1938, the Nazis banned this name and renamed the station Prag Hauptbahnhof. After World War II, the Wilsonovo name wasn't restored due to the Communist coup of 1948, and the name "Hlavni Nadrazi," or simply "main station," was adopted. After 1989, the Wilsonovo name still wasn't restored, but this plaque was installed commemorating Wilson's role in Czechoslovak independence. However, the plaque was removed during the recent restoration, and I figured that it wouldn't be returned. I was wrong. It looks to have been cleaned up, but it was already in decent shape.
Suggested groups:
Comments