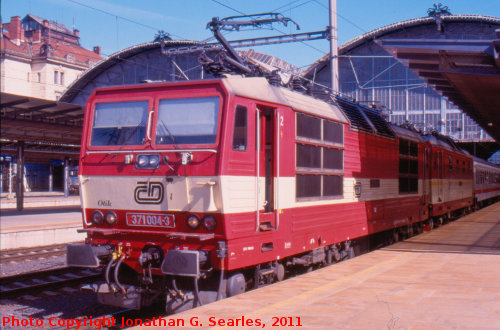 This was after our arrival on the CityNightLine service in Praha Hlavni Nadrazi. Our sleeper was a first class one, operated by JLV, making it actually the only Czech sleeper on the train, as the rest were DB (and possibly SBB, I don't remember). The train was heavy enough to be double headed, although as usual it ran under 160Km/h (99 m.p.h.) on Ceske Drahy. The trailing unit was #371015-9. I noted that both units were named. #371004-3 was named "Otik," and #371015-9 had a common Czech woman's name, although I've forgotten it. Does anybody know it?
Suggested groups:
Comments

You are invited to join and post this shot (and others) to our group Wheels around the World - all transport photos.
(An active managed group, Only members may post)
8 years ago. | Permalink