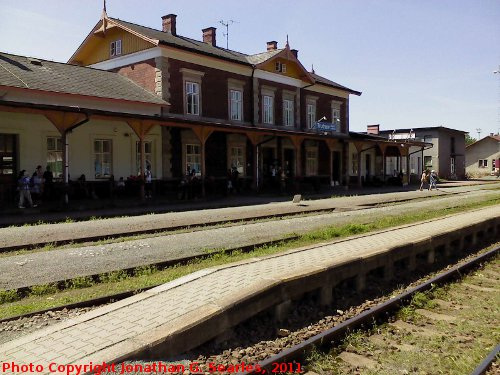 This is Trutnov Hlavni Nadrazi in Trutnov, where I had gone in an attempt to attend the Trutnov Open Air Music Festival. The Trutnov festival is an annual mainstream rock festival with hippie roots that was one of the first to start up after the Velvet Revolution. I ended up skipping it in the end in spite of having bought the train ticket, as it was overcrowded, secured like a prison (meaning that if there wasn't any place to camp, I would be stuck there with no place to sleep), and the security looked intrusive and hostile. By managing it like Woodstock '99, they lost the large ticket price that I could have paid them, and I ended up spending the day photographing the city of Trutnov. Trutnov isn't a bad place to sightsee, after all, as it dates to the 12th Century, and features many preserved buildings from the Baroque period and earlier.
Suggested groups:
Comments