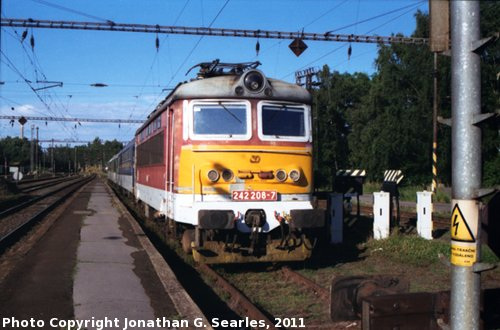 I spotted this unit in one of the stub-end platforms, and noted that it's a Class 242 electric, a class that I liked when I first arrived in the Czech Republic, but rarely got to photograph since it's designed to run on 25,000v 50Hz current, and therefore rarely sees service near Prague. These units actually aren't as old as they look, as although they use a car body style introduced by Skoda in the 1950's, they were actually built in the period 1975-1981. They have 4187 horsepower (3080Kw), and can run at up to 120Km/h (75 m.p.h.), meaning they're not speed demons, but can work local passenger trains and freights.
Suggested groups:
Comments