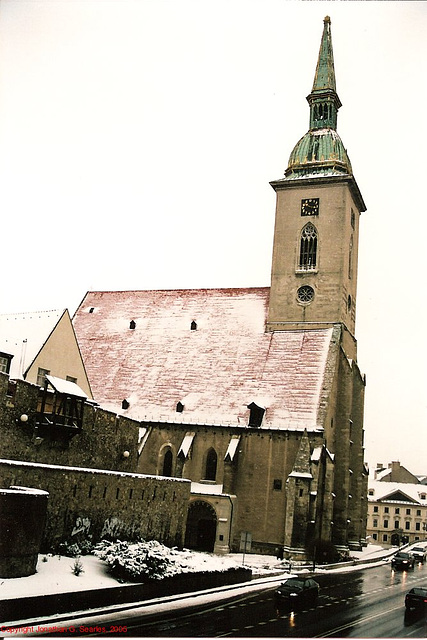 Although the site dates to Roman times, and was in fact the site of a Roman Church, the current St. Martin's Concathedral (formerly St. Martin's Cathedral) dates to 1221, although it was renovated in the 14th, 15th, 18th, and 19th Centuries. Originally, it was incorporated into the city walls, of which you can see the remains on the left. In the days when Bratislava (then Pressburg) was the capital of Hungary(1563-1830), it served as the coronation chapel. Maria Theresa was one of the better known monarchs crowned here.
Suggested groups:
Comments

The tower of St. Martin's Dome of Bratislava is not very decorated because it has been used as part of fortification (you may see the rest of city walls just next to it). There was also a synagogue next to the Dome, but during communist era the city planners had ruined it down and made a bridge/big road between the city and the burg (castle town).
13 years ago. | Permalink