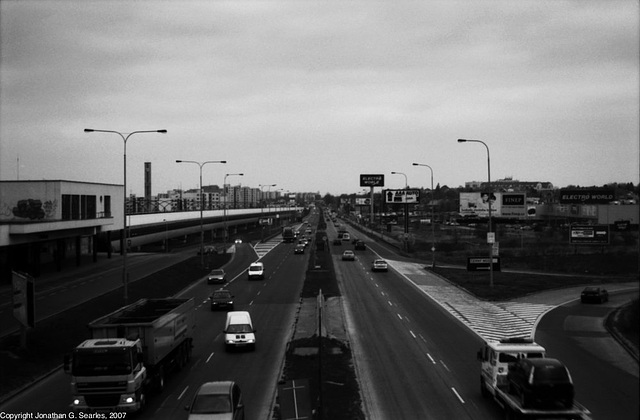 Cerny Most is so spectacularly repulsive that I thought recently, on another bleak car trip out of Prague, that it is indeed a work of art in revulsion. Gaia Mesiah even have a song about it called "Black Bridge," which isn't any less apocalyptic than their other stuff. The song is called "Black Bridge" because that's literally what "Cerny Most" means. Lovely.... Anyway, it is what it looks like, a chaotic collection of strip malls, freeways, highways, litter, and feces shrouded in air pollution, a product first of Communism (it started as a Sidliste), and then of unrestricted capitalism, meaning American-style sprawl without any regard for the environmental and economic consequences. The only upside is that the building and tubular bridge you see on the left is a Metro station, the eastern terminus of Metro Line B.
Translate into English
Suggested groups:
Comments