FOR ANDY --Leaning Into the Eternal Waves 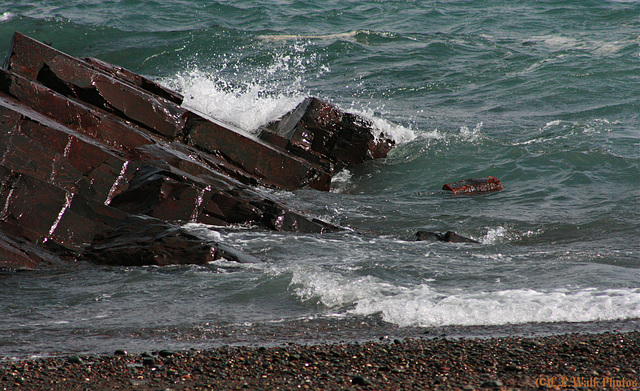 Maybe a geologist can identify these rocks at the base of a cliff? (Campobello Island, New Brunswick Canada)

Continental Drift -- All geologic structures east of the Norumbega Fault, in New England and into Canada, were left behind eons ago when Pangea ripped apart and Europe "drifted" away. And all are remnants of a primordial continent called Avalonia that was crushed out of existence between Eurasia and North America as Pangea initially formed. Thus, eastern New England and coastal Maine share predominant European geology with Cornwall England, The Ardennes, and also the Atlas Mountains of northwest Africa.

Guydel, cammino, Eric Desjours and 2 other people have particularly liked this photo

Yes, a US president spent Summers on an Canadian island, only then reachable by boat (bridge built in early-60's). And the movie "Sunrise at Campobello" -- inaccurate title: Roosevelt's so-called "cottage" is on the west side of the island, so the sun doesn't rise on it.
8 weeks ago. | Permalink