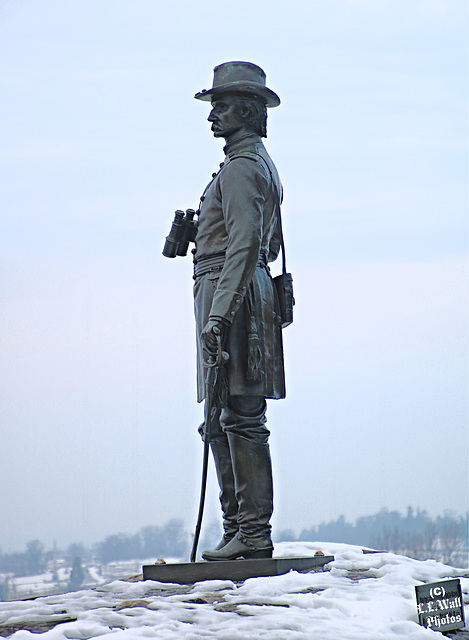 This statue is near the summit of Little Round Top on the Gettysburg (Pennsylvania) Battlefield of the American Civil War (early July 1863). General Gouverneur K. Warren was Chief Engineer of the Nationalist Union Army. Prior to this appointment, he had been regimental and then brigade commander of infantry. On the second day of the three day Battle of Gettysburg, Union troops that should have been guarding a tactically important steep hill, Little Round Top, were ill-advisedly reassigned, and General Warren was sent to Little Round Top to assess the situation. He immediately saw that the hill was about to be attacked by Rebel Confederate regiments from Alabama and Texas (which were supposed to be attacking elsewhere, but instead saw the hill as a target). General Warren, who as an engineer then had no authority over infantry, got Colonel Strong Vincent to move his infantry brigade into position at the last minute onto Little Round Top where they fought off the first Confederate attacks. And then got General Stephen Weed's brigade as reinforcements as subsequent Confederate attacks nearly drove some of Vincent's regiments off the hill. Union forces successfully held Little Round Top for the rest of the battle. In the fight for this hill, General Warren was slightly wounded; however Colonel Vincent and General Weed were shot and both died of their wounds.

he must dress warmer or he will get cold feet
4 months ago. | Permalink

Nice record of these two gentlemen and their actions in battle. Thanks for the interesting historic notes of a time when the generals joined the boys on the line.
4 months ago. | Permalink