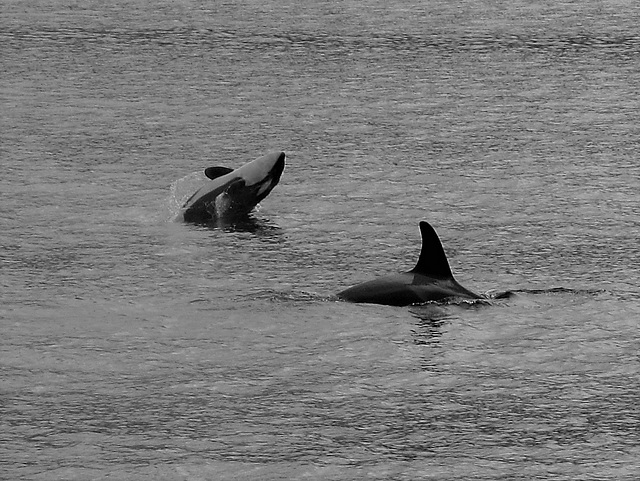 After two trips to Alaska, finally got a decent whale capture. These two are probably mother and baby (breaching) in the Behm Canal on a cruise in the Misty Fjords National Monument near Ketchikan.

Orcas are actually the largest members of the oceanic dolphin family. They are apex predators, as no animal preys on them which is perhaps why they are commonly called killer whales. A cosmopolitan species, they can be found in each of the world's oceans in a variety of marine environments, from Arctic and Antarctic regions to tropical seas, absent only from the Baltic and Black seas, and some areas of the Arctic Ocean. Orcas are highly social; some populations are composed of matrilineal family groups (pods) which are the most stable of any animal species. Their sophisticated hunting techniques and vocal behaviours, which are often specific to a particular group and passed across generations, have been described as manifestations of animal culture.

Wild killer whales are not considered a threat to humans and certainly this pod, of between ten and fifteen members, seemed playful as opposed to aggressive and not at all bothered by the presence of our boat.

Jeff Farley club
A fab capture MG and thank you for posting to FFF.
11 months ago. | Permalink