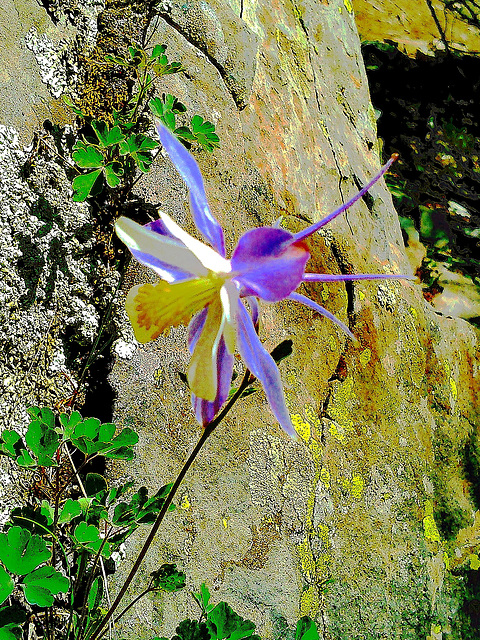 My son noticed this early blooming example of the state flower of Colorado growing from a small crack in a lichen covered rock along the Maroon Snowmass Trail. We were returning from a hike up to Crater Lake and had just rejoined the main trail in the boulder field below the lake. At his point elevation is about 10,150 feet (3,094m). The view is down and to the west. In addition, photo was actually taken with my cell phone, a Kyocera Rise, camera Kyocera C6725 and then processed with Olympus Master 2.30W software.

Aquilegia saximontana can be found in sub-alpine and alpine areas at elevations of 10,000–13,100 feet (3,050-4,000m) in the Rocky Mountains. This species of columbine normally blooms in July and August. The blooms are lavender and white, and the entire plant reaches 2.0–9.8 inches (5-25cm) in height. This plant is endemic (native only) to the Rocky Mountains in Colorado, United States.

Elena M club
it is as gracious as a real colombine dancing!
2 years ago. Translate | Permalink