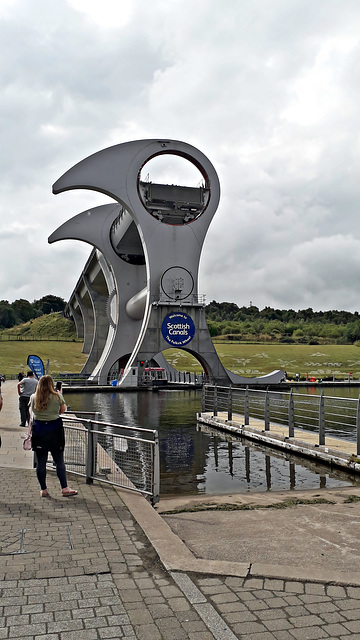 The Falkirk Wheel is a rotating boat lift in Tamfourhill, Falkirk, in central Scotland, connecting the Forth and Clyde Canal with the Union Canal. It reconnects the two canals for the first time since the 1930s. It opened in 2002 as part of the Millennium Link project.
The plan to regenerate central Scotland's canals and reconnect Glasgow with Edinburgh was led by British Waterways with support and funding from seven local authorities, the Scottish Enterprise Network, the European Regional Development Fund, and the Millennium Commission. Planners decided early on to create a dramatic 21st-century landmark structure to reconnect the canals, instead of simply recreating the historic lock flight.
The wheel raises boats by 24 metres (79 ft), but the Union Canal is still 11 metres (36 ft) higher than the aqueduct which meets the wheel. Boats must also pass through a pair of locks between the top of the wheel and the Union Canal. The Falkirk Wheel is the only rotating boat lift of its kind in the world, and one of two working boat lifts in the United Kingdom, the other being the Anderton Boat Lift.

The wheel was fully constructed and assembled at the Butterley Engineering plant in Ripley, Derbyshire. The structure was then dismantled in the summer of 2001, and transported on 35 lorry loads to Falkirk, before being reassembled into five sections on the ground and lifted into place. Construction of the canal required 250,000 m3 (8,800,000 cu ft) of excavation, a 160 m (520 ft) canal tunnel of 8 m (26 ft) diameter, aqueducts of 20 m (66 ft) and 120 m (390 ft), three sets of locks and a number of bridges, as well as 600 m (2,000 ft) of access roads. The 180 m (590 ft) Rough Castle Tunnel was driven in three stages, with the two upper quarters being drilled with a standard excavator before the lower half was dug using a modified road planer in 100 mm (4 in) layers. This technique was 15% cheaper and reduced the build time of the tunnel by two weeks.

Great series from this amazing product of British engineering Alan. Thanks for the interesting notes.
3 months ago. | Permalink
Alan Drury club
has replied to Doug Shepherd club

Hi Doug yes it a great piece of British Engineering this was the third time I have been to it stay safe best wishes Alan.
3 months ago. | Permalink