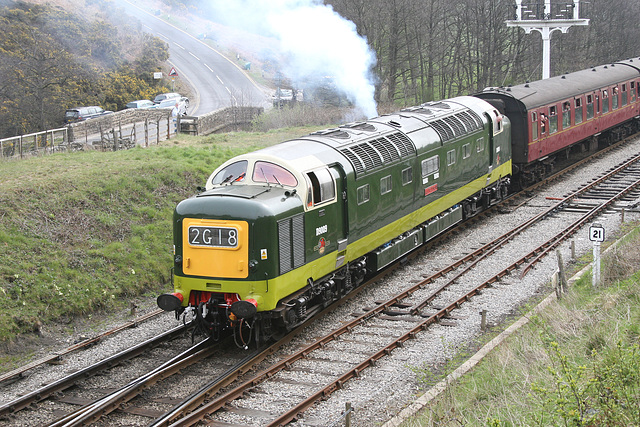 The British Rail Class 55 is a class of diesel locomotive built in 1961 and 1962 by English Electric. They were designed for the high-speed express passenger services on the East Coast Main Line between London King's Cross and Edinburgh. They gained the name "Deltic" from the prototype locomotive, British Railways DP1 DELTIC (the running number DP1 was never carried), which in turn was named after its Napier Deltic power units. Twenty-two locomotives were built, which dominated express passenger services on the East Coast Main Line (ECML), particularly London – Leeds and London – Edinburgh services, until 1978 when InterCity 125 'High Speed Trains' were introduced. 1978–81 saw them gradually relegated to semi-fast or newspaper–parcel–sleeper services along the ECML (destinations including Cambridge, Cleethorpes, Harrogate, Hull, Scarborough and Aberdeen) plus occasional forays 'offline' – York - Liverpool Lime Street semi-fast and Edinburgh - Carlisle via Newcastle stoppers. The fleet was withdrawn from service between January 1980 and December 1981. Three locomotives were retained for a few days, until 2 January 1982, to work the farewell special, all being withdrawn immediately on arrival back at York. Six locomotives entered preservation during 1982 and 1983, one by the National Railway Museum, two by the Deltic Preservation Society, two by the Deltic 9000 Fund and one privately owned. Two cabs were also privately purchased.

gezginruh has particularly liked this photo

Certainly looks a nice polished Deltic here Alan .. a shot liked by me

Thanks Steve quick on the draw again just posted it .Best wishes Alan.
5 years ago. | Permalink

Thank you for these great infos about the diesel locomotives.
I like all of them very much!

Hi gezginruh thanks your YS was most appreciated.Best wishes Alan.
5 years ago. | Permalink