Latest posted Navigate on the map Photos with specific people Most appreciated Most viewed Most commented Search by keywords Search by date
See also... Andy Rodker's
favorite photos All the photos where
Andy Rodker appears 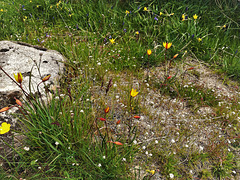 In among other wildflowers can be seen dwarf daffodils, Spanish harebells (bluebells) and wild tulips. 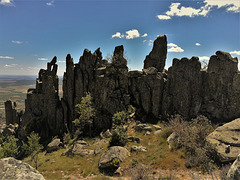 Sierra de La Cabrera granite forms. This was in May 2019, the last time I walked in these mountains. Best on large. 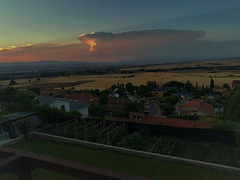 A strange situation; over the mountains and into Segovia Province, they had a succession of storms all day while we had unrelenting blue skies. Only late evening, as I relaxed with a glass of something alright, did I see the storm clouds and the edges caught by the rapidly sinking sun. 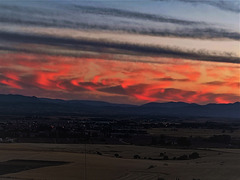 Another of my sister's shots. I think I can now gracefully retire! Best on full screen.

Just a few yards down our street where can be found better views of the Sierra de Guadarrama. My sister's shot. 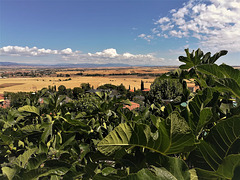 Another shot of the view from the garden. I reckon the figs will be ripe in about a month ("sooner than that" says my brother-in-law and he will probably be right; I was thinking of my 4 fig trees in my London garden years ago!). 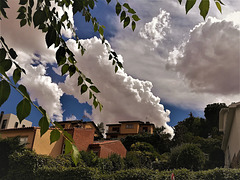 The previous shot of the steps was about 20 feet away from this shot, There are three tiers to the house at the back and only one at the front as it is situated on this steep slope. 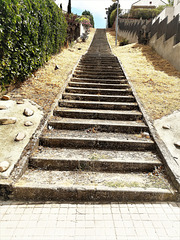 Local steps near the house ... and no bench, even…

I try to do these steps at least twice a day as part of my rehabillitation programme, and today I can proudly relate that I didn't have to stop for a breather once, for the first time! It may look easy but there are 98 steps and try doing it in the height of a Spanish summer! And only 2 months ago I was reliant on my walker / zimmer frame! So Isabel, bring on those mountains! :o) www.youtube.com/watch?v=fayL1WTR1Go Just because I like it! 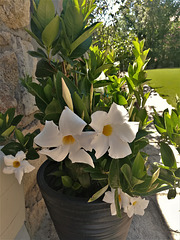 Parked near the front gate, I didn't really notice this container shrub until it burst forth with these large white flowers! In answer to many members' questions about the aroma, I refer to my reply to Peggy below! And for a definitive answer, please see Valeriane's comment below too! 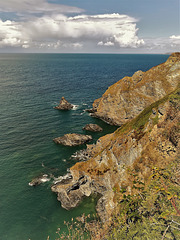 Another one from this place. The last one was from my sister this year. I've not yet been here in foul weather but can imagine the despair and terror of those ships' crews driven ashore here - and they were, in their thousands! 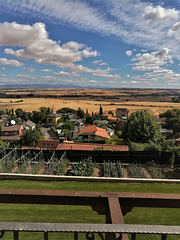 HFF everyone! (Tuscany or Central Spain? - see not…

Difficult to see but the harvest was taking place and the distant hum of the combine harvesters kept going until well past 11 pm every day this past week. My niece (whose home this is of course, although she has been a doctor on Lanzarote these past 5 years) says this view reminds her of Tuscany (she studied medicine on an Erasmus couse a decade or so ago in Florence, so she should know!). Except that ... the world famous impression that Tuscany is full of poplars is quite wrong! This only came about because of a famous photo of an aristocratic estate where the owner had decided to have poplars planted on his lane leading uphill to his palacio. The photo became popular, the rest is history .. and a misconception! 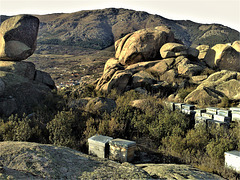 These beehives were stolen too often and so the villagers move them to a different location every few years. Here it is not on any path and when I chatted with the bar owner later he was a bit put out that I had found them! (The next time I came this way, maybe a couple of months later, they had been moved once more!). 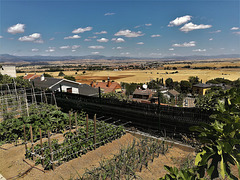 My brother-in-law's pride and joy - part of his fruit and veg garden. The mountains could be seen on the horizon for the first time in a week as the Saharan dust cloud (calima) began to disperse. www.youtube.com/watch?v=MtHalPgCE2s I don't think Percy Grainger quite had this sort of garden in mind, but you never know! I've been told that the ripening corn in the fields is wheat and barley. These were the poppy fields of years past (a few photos scattered through my album), but the modern farmer needs to maximise yield and poppies play no part in his thinking. Full screen please. 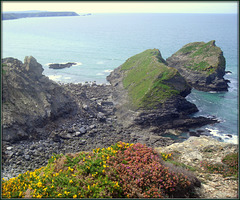 Samphire and Asparagus Islands from Carvannel Downs, South west Peninsula Coast Path. Taken 11 years ago and it seems like yesterday! I see this was taken on my first day back from my first year teaching in Madrid. It had been a tough but rewarding year and as there were no classes from June to early September (therefore no earnings), I went on the dole back in Cornwall. I wasn't able to pull that trick in following years, so this was the last (and come to think of it, first!) 3 month summer holiday I had!

Granite everywhere in the Sierra de La Cabrera! Best on full screen. I`ve never been the greatest Eagles fan but have always liked this one from Joe Walsh. www.youtube.com/watch?v=4Fz-mHGXgzs 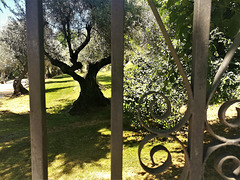 A local park. I've taken similar shots before as the railings and trees seem to go well together! 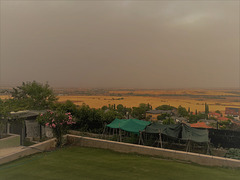 Calima:- Saharan dust storm. What should have been a glorious, if hot, day totally ruined by what has become a far too frequent occurance! The temperature was 39ºC so not even any let up from the heat! Miserable indeed! For the complete gloomy effect, best on full screen! 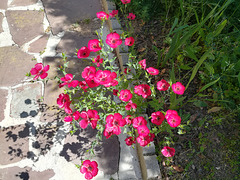 Growing by the path down the side of the house. An attractive flower. en.m.wikipedia.org/wiki/Linum_grandiflorum
3235 items in total
Jump to top