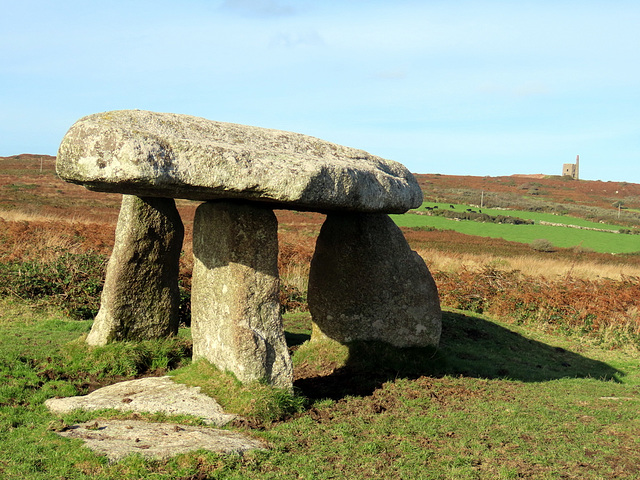 Lanyon Quoit currently has three support stones which stand to a height of 1.5 metres.[2] These bear a capstone which is 5.5 metres long,[3] and which weighs more than 12 tonnes.[4]

In the eighteenth century the quoit had four supporting stones and the structure was tall enough for a person on horseback to ride under. On 19 October 1815, Lanyon Quoit fell down in a storm.[5] Nine years later enough money was raised by local inhabitants to re-erect the structure, under the guidance of Captain Giddy of the Royal Navy. One of the original stones was considered too badly damaged to put back in place, thus there are only three uprights today and the structure does not stand so high as it once did.[4] The reconstruction also placed the structure at right angles to its original position.[4]

The quoit lies at the north end of a long barrow 26 metres long and 12 metres wide.[6] The barrow, which is covered by grass and bracken, is damaged and its outline is difficult to see.[3] At the south end of the barrow are some more large stones that may be the remains of one or more cists.[3]

, neira-Dan have particularly liked this photo

Nice view and a great capture of the stone.
2 years ago. | Permalink