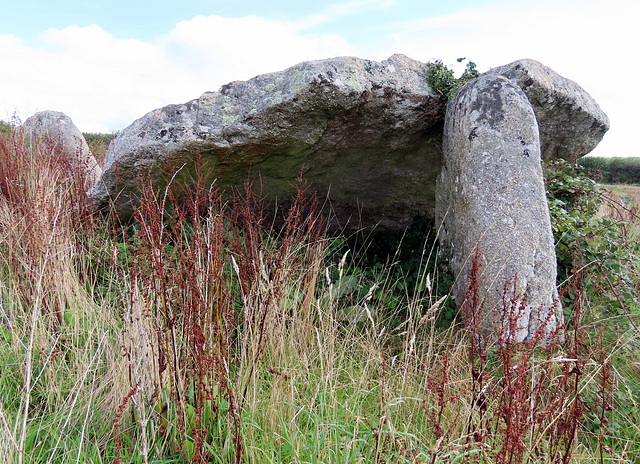 Lesquite Quoit, (also known as Lanivet or Trebyan Quoit) is a portal dolmen, located near Lanivet in Cornwall, United Kingdom.[1][2] It is a ceremonial funerary monument built around 3500 - 2600 BC and used by Britain's early farming communities. There are only 20 portal dolmens surviving in the United Kingdom. Many have suffered from stone-robbing and degradation over time. This example is well preserved, and is a scheduled monument.[3] In 1870, J. Polsue recorded that the local tradition was of the stones "having been thrown to their present location from Helman Tor by the Devil playing quoits."[4][3]

Good thing I had boots on when I had to cross a muddy field to Reach here. I thought the Farmer was suppose to leave a path ,but no such luck,

A fab capture and wonderful history Pat.
2 years ago. | Permalink