Latest posted Navigate on the map Photos with specific people Most appreciated Most viewed Most commented Search by keywords Search by date
See also... Diane Putnam's
favorite photos All the photos where
Diane Putnam appears

Twentieth Anniversary of the World Trade Center terrorist attack. RIP, 2,977 lost at the World Trade Center, the Pentagon and in the plane downed by passengers in a Pennsylvania field, That plane was believed to be headed for The White House. The death toll includes plane passengers, firefighters, police and other first responders. There have been approximately 1,140 additional deaths so far in the aftermath of the attack attributed to injuries caused by cleaning up toxins at the site. Immediately after the event, international sympathy toward America was perhaps the highest it's ever been. Shortly after, George Bush and his advisors began chipping away at that goodwill by making grandiose, irrational plans to "fight terrorism." Some allies joined as, I suppose, a gesture of loyalty to an old friend. Iraq. Then Afghanistan. Too many killed in both countries. * The 20-year enterprise can be called a tragic mistake, or a failure, or a collection of war crimes. In the two decades since 9/11, American foreign policy has gone seriously askew, culminating in the immoral, criminal presidency of Donald Trump. We have lost the respect of old friends. Our domestic policies turned drastically ultra-right under Trump. The worst of our citizens are all that the world seems to know of us, now. There was an insurrection on Jan. 6 this year, grave crimes yet to be fully punished. Joe Biden is a good man who has turned back the most cruel domestic policies of Trump. Conspiracy theories about Covid-19 are killing people. The Mad Karens rule Youtube. Biden is steadfast in his messaging: hate, lies and cruelty will not be tolerated here. Fingers crossed that the mob will be held back enough to hold ground gained since the last election. Fingers crossed that we can save our democracy. * Sources I checked gave varying numbers of civilian, military, contractors, al-Qaeda and Taliban deaths, but the combined total for both countries would be in the hundreds of thousands. 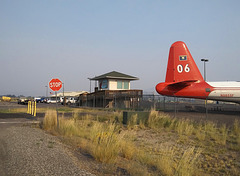 (PiP x 2) An old tanker on display at the Wildfire Learning Center. It's open to the public. The atmosphere is appropriately smoky this day. The low building is the office for the Fremont-Winema National Forest Air Tanker Base. www.scofmp.org/index.shtml 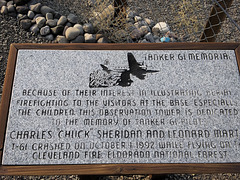 Tanker 61 Memorial "Because of their interest in illustrating aerial firefighting to the visitors at the base, especially the children, this observation tower is dedicated to the memory of Charles "Chick" Sheridan and Leonard Martin. Their T-61 crashed on October 1, 1992 while flying on the Cleveland Fire, Eldorado National Forest." 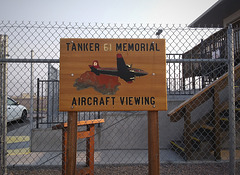 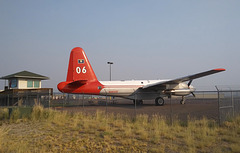 An old tanker on display at the Tanker 61 Wildfire Learning Center. See the memorial sign explaining the purpose of this center. open to the public. The atmosphere is appropriately smoky. Today, Sept. 3, there was one of a few blue skies this summer. It lasted several hours before we were smoked in again! 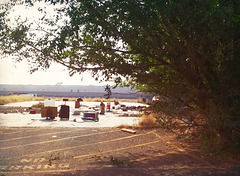 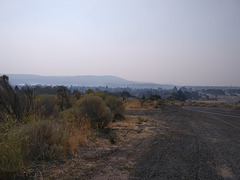 Smoke, day in and day out

I no longer try to keep up on the news about new fires and have given up on the old, big ones. I just try to stay inside as much as possible. 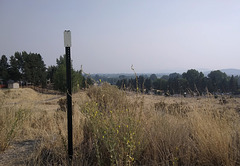 Not the official name of it. The county jail is behind where I am standing. (I was in there many times in my former career. Seriously!) 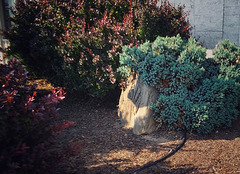 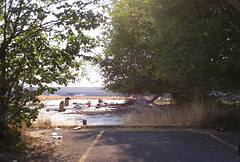 Someone lives in the tent under the tree, or did live there. Why would someone collect all this stuff (and there is even more on the right, not shown) and spread it all over this concrete pad? My impression is that this is a very disorganized, mentally ill person, not an ordinary homeless hoarder. Items were placed far apart. There were things like tables, a suitcase, buckets, ice chests, folding chair, regular chair, backpack, pieces of plywood, miscellaneous flotsam and what looked like a pile of rags. Nothing looked useable. I stood here for a while, but didn't see anyone stirring. This is an unusual scene so close to residential areas. There is even a school a few hundred yards to the right. 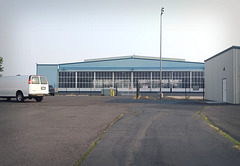 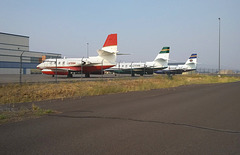 These must be charter planes. 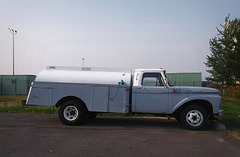 This old clunker appeals to me! It appears to be a retired gasoline, oil or diesel delivery truck for airport equipment. 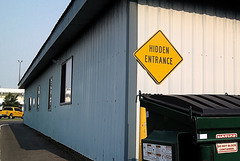 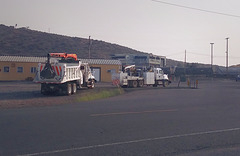 The dim atmosphere is smoke from several forest fires in the region. 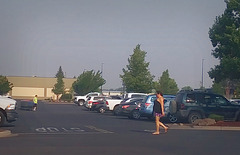 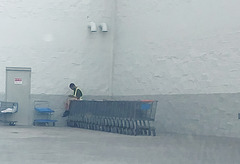