A summer of drought 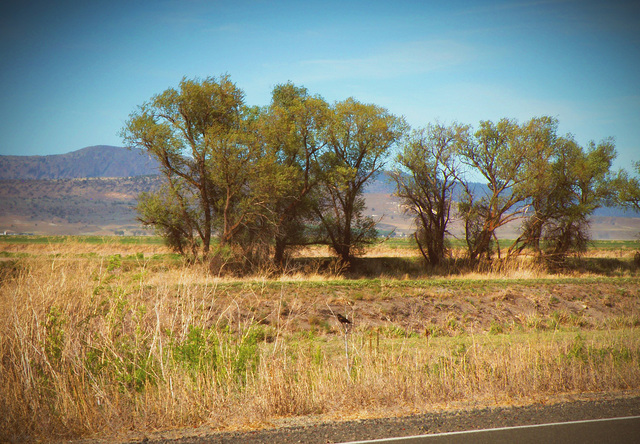 I am on Stateline Road. Oregon is shown in front of me, California behind. This section of the Wildlife Refuge is being drained due to demands of agriculture in the immediate area. The drought is so severe that it was decided by "powers that be" to allow ranchers to use this section of marsh for irrigation. The Klamath River to the WNW is unaffected, and water continues to flow toward the Pacific Ocean to benefit the salmon's lifecycle. (The water war between Native American salmon interests in California and Oregon cattle ranchers has been going on for years.)

The Klamath Wildlife Refuge consists of many large marshes. It is a major flyway for migratory birds of the Pacific west on their route through Canada and Mexico. It's also a destination of dedicated birdwatchers and photographers from around the country. This particular marsh will be drained, but the one across the highway, behind where I'm standing here, will not be. However, it is affected by severe drought and will perhaps lose enough water to endanger waterfowl.

Annemarie, tiabunna, Jean Paul Capdeville and 2 other people have particularly liked this photo

It's strange - that is not done very much here. I do not know why!
4 months ago. | Permalink

An interesting narrative on the conflicting water use issues, Diane. Much the same happens here with our inland Murray/Darling river system, which links across several States. Unfortunately, I suspect that climate change will bring more frequent extremes, so expect more such issues worldwide I guess.
10 days ago. | Permalink

George had the same idea I was going to express. More and more people (to feed, house, produce for and supply with energy), fewer resources, more frequent catastrophes driven by climate change: this will inevitably result in more and more serious conflicts.
Thank you, Diane, for the very informative texts you provide with your images.
9 days ago. | Permalink