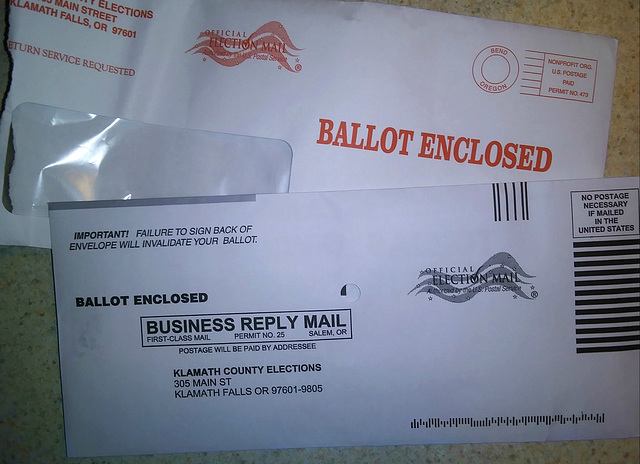 Not "the big one." For you non-Americans, each state has a Primary election. This establishes which candidate each state prefers as the nominee at the party's convention this summer. This time, most likely Biden as Democrat and Trump as Republican. (The State Primary also elects people for local positions like County Commissioners, Judges of the Circuit Court, State Legislators, State Treasurer, etc.)

Maybe other countries have this Primary system. If so, that's probably the only thing you have in common with our ridiculously long and complicated one. Our TV campaign ads are the WORST. Right now the Oregon Republicans are running non-stop ads regarding their thoughts about gun control (too restrictive!), stopping immigration from Mexico, supporting you-know-who no matter what he does, and fear-mongering about Sen. Nancy Pelosi. I have to listen to these because I'm in a hugely Republican (though sparsely populated) part of Oregon, but I'm getting better at tuning them out. Mind you, Democrat's ads aren't great to listen to, either, but I don't want to throw bottles at the TV.

Léopold club
Thanks for the information Diane. This is similar in Canada and Quebec too. The proportional vote has been part of electoral promises in Quebec for many decades. Political promises are like drunk's promises anyways. I recall how Bush won in Florida with its legal but very illegitimate way he did it. He had found a way to prevent black people to vote by not allowing any person with fines to pay to vote. Even parking fines.......
8 weeks ago. | Permalink

tiabunna club
The way it works here is that the candidates are selected by the party itself, so thankfully we're spared that much. Voting in the election is compulsory though (one of the few countries that applies) and the vote is by preferences - ie, if there are candidates for parties A,B,C,D then you number them in your preferred sequence. When votes are counted, if there is no majority (50%+1) then the candidate with the lowest vote is eliminated and that person's votes are allocated according to the preferences of each. This goes on until a majority is achieved. Either way, the political adverts are irritating beyond belief regardless!
8 weeks ago. | Permalink

Sylvain Wiart club
between two evils you must choose the lesser :-))
8 weeks ago. | Permalink

Pam J club
PL EASE BEAR IN MIND SOME STATES TOTALLY DISENFRANCHISE PEOPLE AS FAR AS PRIMARYS ARE CONCERNED. AND THAT ON AMERICA YOU ARE FORCED TO DECLARE WHO YOU VOTE FOR WHEN YOU REGISTER TO VOTE

BOTH THINGS ILLEGAL IN MOST OF THE WORLD.
8 weeks ago. | Permalink
Diane Putnam club has replied to Pam J club
MAYBE IN SOME SOUTHERN STATES THEY ARE "FORCED TO DECLARE WHO YOU VOTE

FOR WHEN YOU REGISTER TO VOTE" BUT I'VE NEVER HEARD OF THAT. BUT, I KNOW

THERE IS 'VOTER SUPPRESSION' IN REPUBLICAN STATES, SUCH AS GEORGIA AND

Blue rubber octopus club
I get my news on the internet, and run an ad-blocker. I avoid clicking on partisan bullshit, and I have successfully avoided seeing a single campaign ad. Which is good, because what is going on in this country right now makes my head want to pop.
7 weeks ago. | Permalink
Diane Putnam club has replied to Blue rubber octopus club
Ka-BOOM! The sound of a brain popping.
6 weeks ago. | Permalink