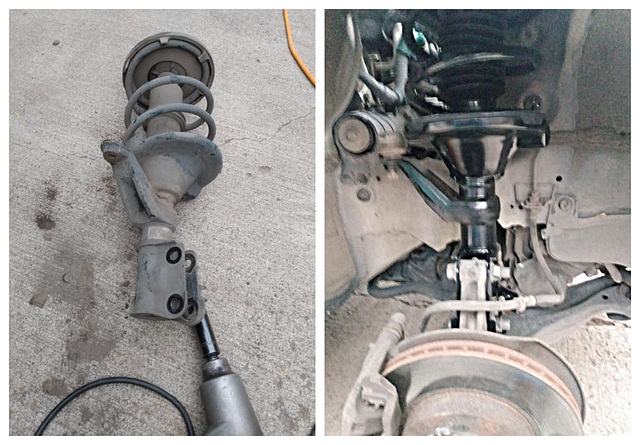 Photos sent by my son, who is working on my car. This is a strut, which fell apart when he took it off. I've hit too many potholes between San Francisco and Klamath Falls since 2001. On the right, the new one.

There is a lot wrong with my 19-year-old Honda and Nate can't believe I was driving it around like this. He asked me how the underside got so scraped up. I'm sure it was the time about five years ago when I was driving around an abandoned cemetery out in the country. The road was two deep ruts with rocks and bushes in the middle. At the time, I was worried about the oil pan, but figured that if it wasn't leaking it was okay. He said that the exhaust manifold had a deep gash in it, so I had just explained why. However, there is nothing wrong with the engine despite years of semi-neglect!

Keith Burton club
I had hoped my daughter would meet and marry a car mechanic............but no such luck I'm afraid :-))) Heaven knows I've needed one over the years and I have absolutely no idea about mechanical stuff..!!

I hope you get it back in much better condition and that it lasts you another few years yet!
4 months ago. Edited 4 months ago. | Permalink
Diane Putnam club has replied to Keith Burton club
Sorry about your lack of free mechanical work, Keith!

My grandson is working alongside his dad, my son was trained by his father, his father was trained by his own father. Two of my brothers are good motorcycle mechanics, the third one could rebuild his engine on the side of the road if he had to. However, my dad never worked on our cars. He said he spent too much time working on logging equipment in the woods, so refused to have anything to do with cars. ;-b

I'm very mechanical, believe it or not, but have never worked on cars. I'm pretty good at around the house repairs.
4 months ago. | Permalink