The Bone Caves of Inchnadamph 2 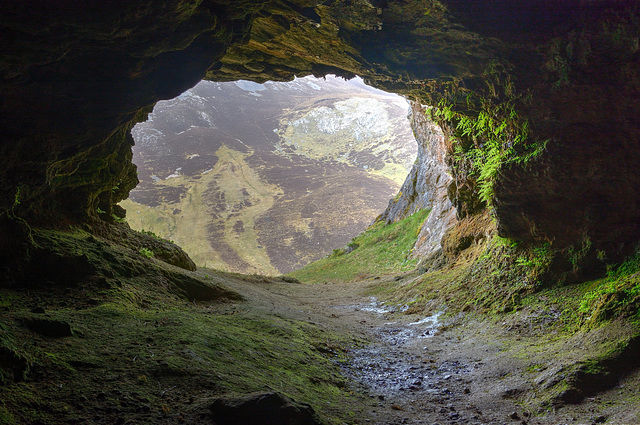 The second of these caves were we took shelter from the rain. They were not really that deep, only a few metres more behind me until the end. ~

"There is no indication that the caves were ever used as human habitat, but two separate human burials have been discovered within the caves. investigators made an exciting discovery in one of the caves; a human skull, missing its jaw bones, was found in a small stone enclosure. A second set of human bones was discovered in a niche in the rear of the cave wall.

These remains both suggest intentional burials. Radio-carbon dating of the bones, along with a later find of two further human remains, suggests that they were buried here between 2515 and 2720 BC. A small object made from reindeer antler was also found, dating to about 850 years ago, and a small pin made from a walrus tusk dating to about 2,000 years ago.

In total, over 1000 pieces of reindeer antler have been found in the Bone Caves, with dates ranging from 47,000 to 8,300 years ago. The large number of reindeer bone suggests that the area at the head of the glen was used as a calving ground. One rare find was the skull of a Northern lynx, dated to 1,770 years ago. This is the only Northern lynx ever found in Scotland. Other intriguing remains include a possible polar bear, arctic fox, wolf, and brown bear."
www.britainexpress.com/attractions.htm?attraction=5098

Nouchetdu38, Keith Burton, Ries, Berny and 17 other people have particularly liked this photo

What a beautiful series Herb.
Thank you for the interesting note.
3 weeks ago. | Permalink

This is a great shot Herb.
3 weeks ago. | Permalink
Herb Riddle club
has replied to Loose_Grip club

My thanks for just enjoying there Peter.
3 weeks ago. | Permalink

Always good to share such scenes and experiences Roger.
3 weeks ago. Translate | Permalink

A great set of photos of the Bone Caves Herb super place to visit and keep out of the rain.
Like this one the best.
Gordon
3 weeks ago. | Permalink
Herb Riddle club
has replied to TOZ club

It was a bit of a slog to get to these and at one point I wondered if I had done the right thing to drag Eileen up here but it all turned out well in the end and i ended up with these great photo memories too so can't be bad. It was quite dry in here despite the weather. Glad you liked them.

Superb shot and Pips! Good notes too. I'd never heard of this place!
3 weeks ago. | Permalink
Herb Riddle club
has replied to Andy Rodker club

Great to see you again Andy. Not a place on many local maps for sure being a long way from anywhere at the end too of a good little hike. They are quite famous around this part of Scotland though.

Always my pleasure to share such thing with you Maggs.

All the Best. Herb
3 weeks ago. | Permalink

Glad that you enjoyed the contrast here Jose.

Fantastic look through!
2 weeks ago. | Permalink