Caught me! Portal RF LoVe is...... Monument to the Port Workers 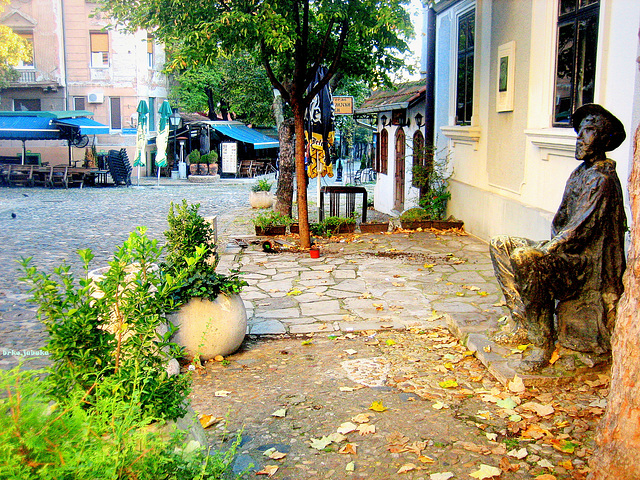 Skadarlija is a bohemian quarter in the center of Belgrade (Skadarska ulica). Every day about 20,000 people visit Skadarlija. Due to the proximity of the National Theater, there were many actors who lived in the late 19th and early 20th centuries. Other actors, poets, writers, painters came to act with actors.Because of this, many taverns, some of the oldest in Belgrade, were nicknamed in Skadarlija. It was here that dawn was welcomed by artists who entered the history of Serbian culture. One of them is Georgija "Đura" Jaksic / Georgija "Djura" Jaksic (27 July 1832 - 16 November 1878) was a Serbian poet, painter, dramatist and writer who is considered one of the most important representatives of Serbian romanticism.He was also bohemian. His creative and starving life of an educated and temperamental man often took place in the bohemian ambiance of the Skadarlija Taverns Tri šešira i Dva jelena, in front of which in his glory is presented with a sculpture in the picture.

Very nicely composed Petar. I particularly like the colour of the fallen leaves and the patina on the statue. An interesting narrative too.
3 years ago. | Permalink