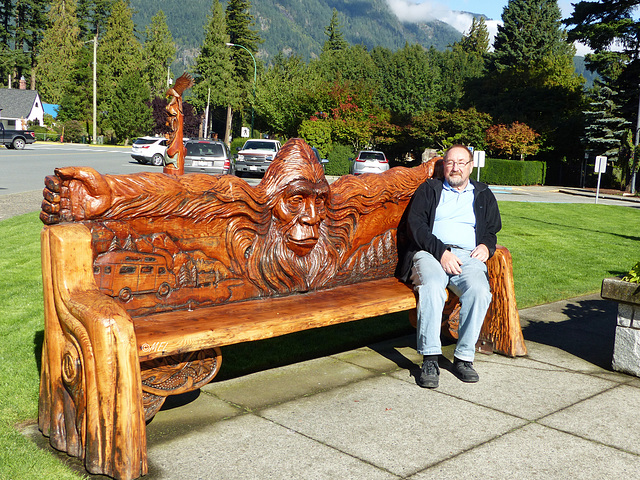 HBM have a grt. Week
2 months ago. Translate | Permalink

HBM und schöne Woche!
2 months ago. Translate | Permalink
Erika+Manfred club has replied to Dida From Augsburg club
Könnte sein:
The town of Hope is famous for its artistic chainsaw carvings, which include Sasquatch creations. At the intersection of Wallace Street and 3rd Avenue stands a tall chainsaw-carved Sasquatch known as Harry; the namesake and wooden version of the Sasquatch in the movie “Harry and the Hendersons”. Harry was skillfully carved by well-known local chainsaw carver Randy Swope. Another of his creations, at the intersection of Wallace Street and Fraser Avenue, depicts a tourist holding a souvenir: a small Sasquatch carving.
In front of the Hope District Hall on Wallace Street, you’ll find a stunning Sasquatch-themed wooden bench crafted by local chainsaw carving legend, Pete Ryan. The intricately detailed bench includes a portrayal of Hope BC, featuring trees, mountains, and wildlife. Sasquatch hovers above the scene with his arms outstretched, enveloping the scene below him, as if protecting the region. @: scenic7bc.com/the-sasquatch-highway
2 months ago. | Permalink
Dida From Augsburg club has replied to Erika+Manfred club
Ha - danke, und den Film kenn ich sogar! ;-D
2 months ago. Translate | Permalink

HBM and enjoy your weekend
2 months ago. Translate | Permalink

Léopold club
I suppose this happy and smiling man is your husband is he Erika ?