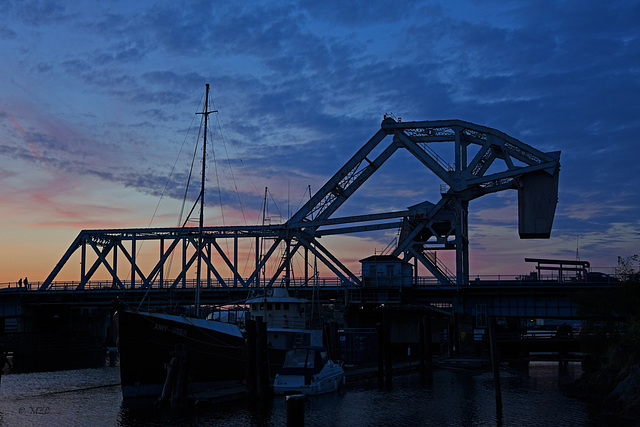 The Johnson Street Bridge is a bascule bridge that spans the harbour of Victoria, British Columbia. It is commonly referred to as the "Blue Bridge" because of its distinctive blue colour.
The bascule spans were designed by the Strauss Bascule Company Limited and were fabricated in Ontario. The sub-structure was built by the City of Victoria Engineering Department and required 9,144 cubic metres (11,960 cubic yards) of concrete. The bridge was completed in January 1924 at a cost of C$918,000. The bridge originally had street car rails running down the center of the road span, but they were never used, and were removed a few years later. The original wood deck was replaced by a steel grid in 1966 and the steel structure was repainted in 1979 as part of an extensive renovation.
The bridge had two opening spans of 45 m (148 ft) that operate independently, a three-lane highway span of 350 tonnes and a railway span of 150 tons. The approaches are fixed girders, the east is 34 m (112 ft) and the west is 22 m (72 ft). The counterweights are made of hollow concrete and total 780 tonnes. Daily traffic in 2010 is 30,000 trips a day at peak usage, of which 4000 are pedestrians, 3000 cyclists, and 23,000 vehicles. Until 2011, the rail span for the E&N was used twice a day by the Via Rail Dayliner, for trips up the island towards Duncan, Nanaimo and Courtenay. The rail span and counterweight have now been removed. Q: Wikipedia