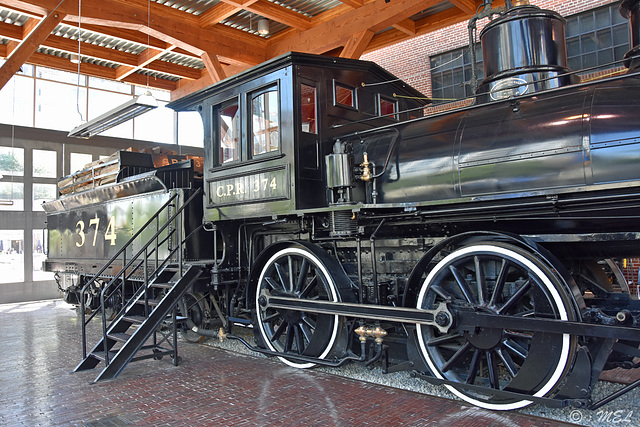 Engine No. 374 was the steam engine which pulled the first transcontinental train to arrive in Vancouver, arriving on May 23, 1887. This was a year after its sister Engine No. 371 brought the first Canadian Pacific Railway train to cross Canada into Port Moody. No. 374 was built by the CPR in 1886 and was one of eight similar 4-4-0 steam locomotives built that year in the Montreal shops.
While No. 371 was scrapped in 1915, No. 374 was completely rebuilt in 1914 and continued in service until 1945. It was then cosmetically restored to look similar to its original 1886 appearance and put on display at Kitsilano beach. It remained there until 1983 when it was moved to a warehouse on Granville Island and received a new round of restoration work. No. 374 was put on display on the turntable at the renovated CPR Drake Street roundhouse during Expo 86.
In 1988 the Expo 86 site was sold to Concord Pacific, and in the course of the False Creek North Development Plan that was approved in November 1989, the developer agreed to convert and expand the buildings to comprise the Roundhouse Community Centre, that was designed by Baker McGarva Hart (now known as VIA Architecture) and completed in 1997. The master-plan negotiation had made no provision for Engine 374 and so it was temporarily housing inside the 1880s engine shed.
Successful fundraising was undertaken by the Vancouver Parks Board and the Lions Club, and in 1998 the new Engine 374 pavilion was completed, also designed by Baker McGarva Hart (now known as VIA Architecture). In the 1990s the roundhouse site was converted into a community centre as part of the and a new building, the 374 Station Pavilion, was built to house and preserve No. 374.
Now a central feature of the Yaletown area redevelopment, the Engine 374 pavilion is open for public viewing (11am-3pm, 7 days a week) at the Roundhouse Community Arts and Recreation Centre at 181 Roundhouse Mews in Vancouver, BC. An anniversary celebration happens annually on Victoria Day at the Roundhouse Turntable.