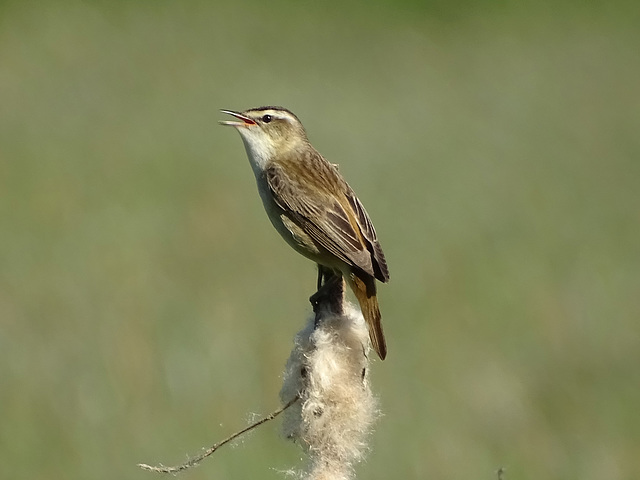 Even with two hearing aids in I find it difficult to hear birdsong unless the surrounding area is totally silent, and even if I do hear it, I cannot determine the direction from whence it comes. Step in Adrian. Yesterday at the beginning of our canal walk he pointed out this little brown bird (an unidentified LBB) singing his heart out n the opposite side of the canal. I took several photos of it, and one of them worked quite well. When we returned to the same place two hours later he was still there and still making heavenly music. It wasn't until I downloaded the photo that I could identify the songster.

Suggested groups:
26 comments - The latest ones

Joe, Son of the Rock club
A charming little songster, Amelia. Listening to the sound file was quite delightful. All the best, Joe
2 months ago. | Permalink

Jean club
A superb capture of this lovely little bird. Great background. It sets him off perfectly. Enjoy the week ahead and stay happy and healthy.
2 months ago. Edited 2 months ago. | Permalink

Rosalyn Hilborne club
An absolutely gorgeous picture Amelia! Thank you for the wonderful link. Sometimes the dawn chorus wakes me up, but how could I mind such lovely singing.
Good luck tomorrow. Wishing you a good new week.
2 months ago. | Permalink

S Drury club
What a great shot Amelia and fantastic detail full size .. i am sure the down from the blown bullrush it is sitting on would make a lovely soft nest lining ..

tiabunna club
Beautifully taken, Amelia. It was good to hear it too.
2 months ago. | Permalink

Roger (Grisly) club
A superb capture and an attractive little bird Amelia
Thank you for the link.
2 months ago. Edited 2 months ago. | Permalink

Colin Ashcroft club
Superb photograph, so important to be able to hear the calls. I have had some hearing problems In one ear recently and found locating the source of a call very difficult so much so that I never saw the bird that I knew was calling ( a Redstart ). I would suggest this is a Sedge Warbler and the Willow Warbler heard was close by. If the Sedge Warbler was calling it is a very scratchy song nothing as beautiful as the Willow Warbler.
2 months ago. | Permalink

polytropos club
Excellent capture!
And thanks also for the vocal rehearsal!
2 months ago. | Permalink