Attingham floating fence Happy floating fence Friday Nature's complement Inside an old mustard pot The Harbourmaster's House. Dysart High and Dry in Dysart Reach for the Sky. High and Dry in Elie I must go down to the seas again. Iced fungi Iced fungi Winter's signature HFF to you all. Padlocked Happisburgh on the first day of Advent Bring me sunshine Our village through rose tinted glass The last HFF of 2019 Circles of confusion. Christmas morning in Shrewsbury Row your boat Tractor On the beach I am sailing HFF to you all. Maesbury lift bridge Newhaven Harbour. Autumn Meets Winter Time warp Salvador Dali's clock HFF to you all. Fish Tales Sea Dancer + clickable PiP Wells lifeboat station Over the top + PiP View of the Scottish borders from Smailholm Tower. Smailholm Peel Tower Shadows and reflections One Day in Autumn Bow wave Jewels of the seashore Melrose Abbey Melrose Abbey Gargoyles Melrose Abbey Melorose Abbey 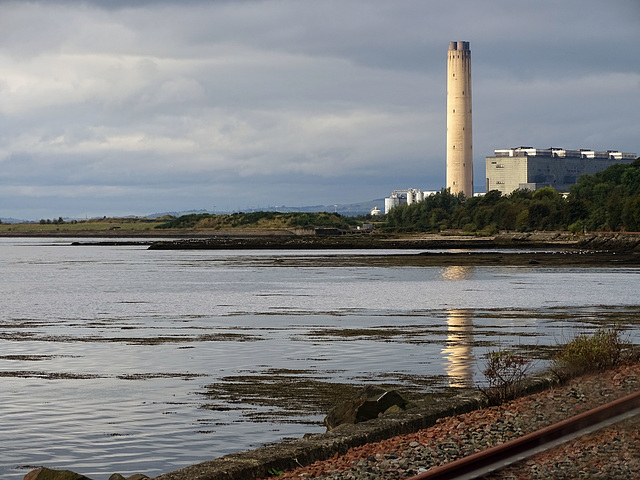 At the time of opening in the early 1970s Longannet was the largest power station in Europe with a capacity of 2,400 MW. Designed by Scottish architects Robert Matthew, Johnson Marshall & Partners, construction began in 1965 on land reclaimed from the Firth of Forth using ash from the Kincardine power station. The first electricity was generated in 1970 and the station was running at full capacity by 1973 once construction of all units was complete.

In 2003 Longannet was identified as Scotland’s largest source of pollution. The power station closed in 2016 after 46 years of producing electricity. The closure marked the end of coal-fired generation in Scotland.

The power station is gradually being demolished. See below for video.

Joe, Son of the Rock, Sylvain Wiart, John Sheldon, Frans Schols and 30 other people have particularly liked this photo

Love this composition of this industrial but but somehow quite beautiful scene. The light on the chimney and the reflection of same make for a great picture. Thanks for the interesting notes Amelia.
20 months ago. | Permalink

Great, with this mirroring...
20 months ago. | Permalink

A really beautiful industrial landscape.................the soft, diffused light is gorgeous, especially where it lights up the chimney and the adjacent buildings. I love the reflections too.

Thanks for the link to the video...............the explosives people do a superb job of this sort of thing and I've love to see it in real life. A ringside seat when they take the chimney down would be brilliant.
20 months ago. | Permalink

King Coal has had its day
20 months ago. | Permalink
Amelia Heath club
has replied to Nick Weall club

A magnificent image. I've never seen Longannet look so beautiful. It's making me feel they should leave the chimney standing as a memorial to coal.
20 months ago. | Permalink
Amelia Heath club
has replied to Jean club

I agree with you, Jean.
20 months ago. | Permalink

A great industrial image, ignoring the pollution they could look very dramatic when all eight cooling towers were in us Ratcliffe on Soar did
20 months ago. | Permalink

Captured in wonderful light Amelia, a sad but necessary demise.
20 months ago. | Permalink

Great light and composition - that tower should definitely stay
20 months ago. | Permalink

Beautifully composed, Amelia. I'd also agree that the chimney should be kept for historical value.
20 months ago. | Permalink

I really like this composition, especially the way the chimney is thrusting its way up into the sky, matched by its reflection.

Interesting info and a great photo. Thought when I saw the photo at first that it was a lighthouse.
20 months ago. | Permalink

Have a wonderful day, Amelia.
20 months ago. Translate | Permalink

I like the classic lines....and it has a fascinating story, Amelia
20 months ago. | Permalink

Excellent composition, and you caught that evocative lighting very well. "This is the death of coal" sounds like something that T S Eliot might have written ...
19 months ago. | Permalink